Last week or two weeks ago, a Pulitzer-prize-winning reporter from "The New York Times," died. His name was Sydney Schanberg and more than anyone else, he was responsible for bringing the horrors of the Khmer Rouge and Pol Pot to the attention of the world.

Pol Pot killed literally millions of his countrymen. You may recall some jaw-dropping photographs of his various genocides. The sea of skulls and bones.

In a movie about Schanberg and his friend and photographer, Dith Pran, "The Killing Fields," there was a scene where Pran ran over acres of skulls to escape from those seeking to capture and kill him. 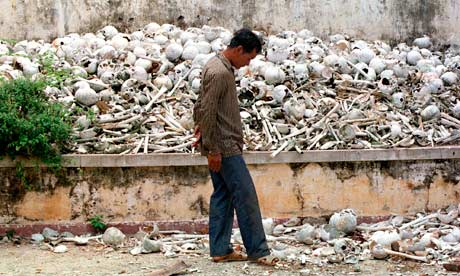 This morning I had an IM conversation with an old friend whom I worked with over two decades ago. He's 69 now and involuntarily retired from the industry, forced out of a WPP-property a few years ago along with his almost 50 years of experience.

It was all very sad. Sad that as an industry we are throwing out brains like homicidal tinpot dictator.

I know no agency wants to have a 69-year-old around. Most don't even want someone my age. Or someone 44.

Walking over the dead.
Posted by george tannenbaum at 10:26 AM