My wife and I were up early, as usual, and had breakfast with Teresa. While my wife helped her with the dishes and straightened out our room, I hustled our luggage out to our rental Ford Fusion and loaded the bags in the trunk.

I ran down to the general store and found four large cold bottles of Topo Chico Agua Mineral and placed a bottle in each of the Ford's four cupholders. If you're a connoisseur of sparkling water--or seltzer--as I am, you will likely rate Topo-Chico at the top of your list. It's clean tangy taste and assertive carbonation is one of the many things I look forward to when I travel south of the border. 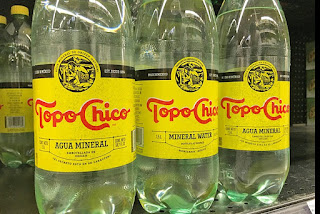 Then I went inside the house to say goodbye, for now, to Teresa and usher my wife outside.

I am an abrupt leaver. I hate the pain of saying goodbye, so like someone who rips a band-aid quickly off, I make short work of any formalities. My wife, naturally, is the opposite. There's always one more thing she has forgotten to say that or one last chore she must do. The act of leaving, for her, often lasts longer than the fact of staying.

I hustled my wife out to the car, we fastened ourselves in and circled by Gulliermo Sisto's house, honking twice before we headed to route 40D, West from Saltillo. We traveled eight hours through Matamoros, through Torreon (where we played against the Vaqueros Laguna) through the 5,000-foot peaks of Durango and onto the former fishing village, now tourist mecca of Mazatlan, Sinaloa.

In the indigenous Nahuatl language, Mazatlan means "place of deer." And it was for my dear, my wife, that I consented to spending a week doing nothing but laying on a beach in the sun and reading.

We had found an expensive hotel with an ocean view and, once the roar of the air-conditioner was silenced, within ear-shot of the waves of the Pacific.

We work hard at work all year. For the next six days or so, we will be working hard at rest.

I will be writing intermittently. That is if I don't sleep the entire week.

And I'll be recovering from a world that is often too much with us.

As for now, I leave you with this, Wordsworth, which was running through my head as I was running west through Mexico.

I Wandered Lonely as a Cloud

I wandered lonely as a cloud
That floats on high o'er vales and hills,
When all at once I saw a crowd,
A host, of golden daffodils;
Beside the lake, beneath the trees,
Fluttering and dancing in the breeze.

Continuous as the stars that shine
And twinkle on the milky way,
They stretched in never-ending line
Along the margin of a bay:
Ten thousand saw I at a glance,
Tossing their heads in sprightly dance.

The waves beside them danced; but they
Out-did the sparkling waves in glee:
A poet could not but be gay,
In such a jocund company:
I gazed—and gazed—but little thought
What wealth the show to me had brought:

For oft, when on my couch I lie
In vacant or in pensive mood,
They flash upon that inward eye
Which is the bliss of solitude;
And then my heart with pleasure fills,
And dances with the daffodils.

Posted by george tannenbaum at 7:46 PM