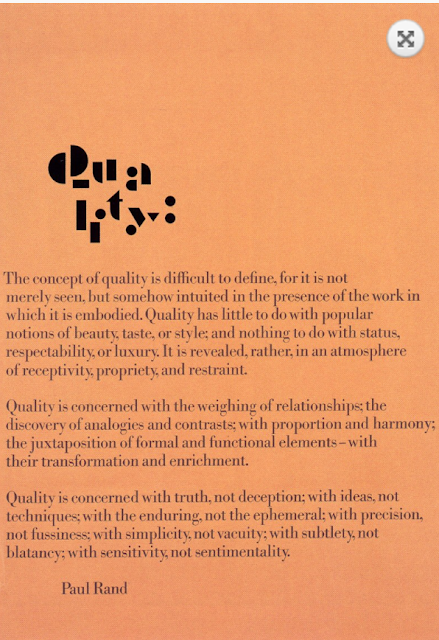 I was doing a bit of research yesterday--doing something relatively old-fashioned, that is chasing down an idea, seeing if I could make it work.

I'll admit, I've been in a little bit of a funk for a couple of reasons--the recent Pepsi commercial being one of them. The idea, which seems to be prevalent, that reaching people is "math," annoys me. It makes me shake my head, add up my net-worth, and then look for a small cabin in an out-of-the-way place where maybe I can escape from this latest mania.

While doing research, however, I stumbled upon this. It's by Paul Rand--something he designed and wrote way back in the early 1960s for a client of his.

I guess you could say it's horribly dated.

You could criticize the writing.

Even criticize its design.

But I wonder if we'd all be better off if we pinned it to our walls. And considered it once-in-a-while.

Posted by george tannenbaum at 6:54 AM