My friend Bob Hoffman, the contrary Ad Contrarian has done a better job than anyone uncovering and exposing the degree to which modern marketing has become not a marketer, but rather, a surveillance state.

Even if you adjust your privacy settings all the way to 11, chances are your every blink and every keystroke is being tracked by someone somewhere. Further that data on you, from your site visits to shopping habits to filling out purportedly innocuous online quizzes is being parceled like a collateralized debt obligation and meted out and sold to hundreds of data miners, aka digital stalkers, spies and parasites.

Online surveillance, despite a sound bite here and there from our fraudulently elected plutocrats will only get worse. Worse, because it seems to me that we live in a world where things like fairness, moderation and ethical behavior are as outmoded as a crossbow. Or, maybe more accurately, moral behavior has been bent and subjugated to the power of the almighty dollar.

What if a brave agency, client or holding company, or a collective of them banded together to create a new(old) kind of advertising?

Betraying my Judeo roots, let’s call it Goldenrulevertising. What if, and this is quaint, we treated customers as we ourselves would like to be treated?

What if we believed that the purpose of advertising was not to stalk targets, but existed instead to inform, entertain and persuade? What if we believed—and acted accordingly—in the nobility of our trade. That we don’t chase people into buying our wares but help them, instead, make informed decisions?

What if we said we will cookie no more?

What if we used our clout with networks and banded together and said that 25 commercial minutes per hour is unfair to people. That that video bludgeoning is not fomenting sales, but is, instead, driving customers away.

What if, pursuant to yesterday’s post, we reminded ourselves (gendered language notwithstanding) that the consumer isn’t a moron (or a vassal) but is our spouse.

Yesterday in this space, I mentioned the great copywriter from the salad days of DDB, Bob Levenson. Almost 50 years ago, he wrote the ad below. It was art-directed by my old boss, Len Sirowitz, with harrowing limbic intensity.

What if someone, somewhere, or a group of us, re-created it, for today. Better than an ad—what if we started treating others how we wish to be treated. 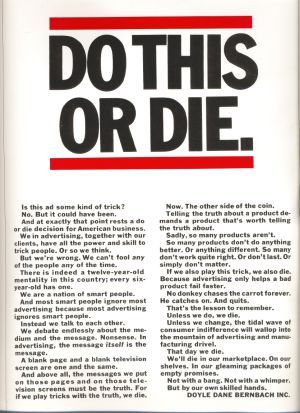 And at exactly that point rests a do or die decision for American business.
We in advertising, together with our clients, have all the power and skill to trick people. Or so we think.
But we're wrong. We can't fool any of the people any of the time.
There is indeed a twelve-year-old mentality in this country; every six-year-old has one.
We are a nation of smart people.
And most smart people ignore most advertising because most advertising ignores smart people.