Since I was very young in the business, I have been on deadline.

My first job—that was way back literally 40 years ago—was writing copy for the Montgomery Ward catalog. My starting salary was $11,700 and after six months, I got a thousand dollar raise, which in those two bagels for 35-cents days was not all that insignificant.

Then as now, I got up early. I got into the office around seven. A good two hours before most everyone else, and I blasted through the pages I was required to write. When I left Wards for Bloomingdale’s, my salary had risen to $18,300.

At Bloomingdale’s I also had a number of pages to write each week. The Dallas Morning News, or the Chicago Tribune, or the Boston Globe, or the Miami Herald weren’t going to wait for you. When the mismatched traffic guy stood in your doorway—yes, we had offices back then, you had to come across with your copy. I stayed at Bloomingdale’s for about two years and left making $26,000.

I took a pay cut and a pace cut to work at my first agency. And it took me a while to adjust. I like thinking as much as the next person. But too much thinking and not enough typing isn’t good for anyone in business.

Despite all the modern proclivities, marketing—or advertising, or sales, or whatever you want to call it, isn’t really theoretical. Not when it’s done right anyway. There’s really no better way to get a sense of the efficacy of an ad or a campaign than running something and seeing the reaction. Anything else is like trying to learn to ride a bicycle out of a book. You can get some general ideas. But the truth is, you’ll never really grasp it until you skin your knees a couple dozen times. 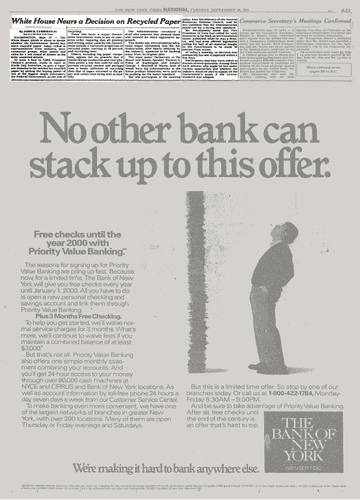 When I was about five years in the business, I got a job at a prestigious ad agency called Ally & Gargano. I worked on a financial services account.

Even back then, I was barely 30, I figured if I could handle something with a high degree of difficulty I’d be well-suited to keep working through the sundry recessions and depressions which are a fact of American economic life.

So once again, I got in early and probably conceived, wrote and sold two ads a week for five years. I also grabbed with a certain amount of Sammy Glick aggressiveness, every stray assignment I could get my hands on.

By the time I was 33, I was a senior vice president and group creative director. I had never missed a deadline.

In the ensuing years, on automotive, technology and financial accounts mainly, I always gave myself something to do, even when nothing was due.

For instance, when I worked on Mercedes-Benz I had this notion that most people who test drive expensive cars really feel a little intimidated by the whole process. It’s like being a fat guy and buying an Armani suit. You feel out of place.

So I researched and wrote a “how-to guide” on test-driving a car. My thesis is that most people look under the hood, for instance, but they don’t really know what they’re looking at or for. Likewise they slam shut the doors. But what are they listening for. I figured it couldn’t hurt to tell people.

This wasn’t an assignment that was given to me. It was something I made up on my own. Because it was something that puzzled me. It also gave me something to do, to keep my synapses busier than most creative resource managers know how to do.

I did the same sort of thing when I worked on high-tech brands. I guess I have a very inquisitive bearing. I don’t believe spending $60,000 on a car or $1,000,000 on a mainframe computer is a purely emotional decision. And even if it is, I want some rational ballast in the back of my head just in case someone pokes me and calls me a nitwit.

I mean, is all artificial intelligence alike? Or all clouds? Or all servers? In today's advertising eccch-o-system I'd be hard-pressed to make a rational decision on buying one, even if I wanted to be rational. Sometimes it seems to me you can find more information on bubble gum than you can on multi-million dollar technologies.

Now, of course, I am no longer working for a giant, faceless and insensitive holding company.

I am working for giant, faceless and insensitive me.

Today, I have three or four accounts circling around my head like gnats on a summer’s day. Before they get too pesky, I swat them away by sitting at my Smith-Corona.

It’s not profound but after all these years or singing for my supper or writing for my livelihood, I’ve discovered something.

The best way to do something is to do it.

Just about every day, I get an email or four from someone in the business or on its nearby periphery. How do you post every day, they ask. Have you written something longer and you’re excerpting from it?

Life is pressure. It’s being backed up against the wall. It’s facing grim visages and doubters. It’s like being a giant osprey at the beach. There are hungry little ospreys way up high in that nest you built. And Seamless or Doordash or BestNest ain’t delivering. You’ve got to bring home the hormone-free, non-GMO, kosher bacon. Or a fish. Whatevs.

For about the past two weeks, though to be honest I just noticed it yesterday, LinkedIn, in an act of algorithmic kindness, has started appending a measure to articles I post on their site. Tuesday’s said, “5 min read”. Monday’s said, “4 min read”.

That’s interesting, I said to myself. I suppose they’re giving the viewer some gauge of the readability of the articles posted on their site. For a minute, I thought “that’s nice. That’s helpful.”

But then I sat down to write this piece.

It probably took you three or four or five minutes to read. I suppose that’s what LinkedIn will say.

What they didn’t mention is this: It took me a lifetime to write.

And a lifetime of writing.

Posted by george tannenbaum at 7:20 AM