The Journal, the plague, advertising and Harold Diddlebock.

I was also attracted to the Journal because of an ad campaign they did featuring luminaries from the ad industry—their stories on why they read the Journal. These were the people I wanted to learn from and work for. I reasoned if they read the Journal, I should too. Here are a couple of those ads. (BTW, Shep gave me my start, Gargano, a push, Hayden was my mentor, and Riney, my idol.) 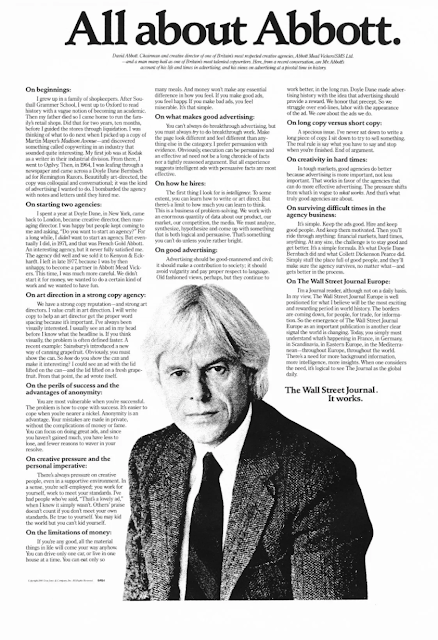 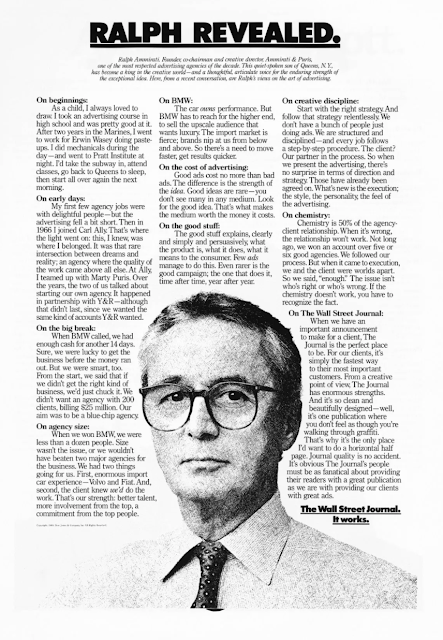 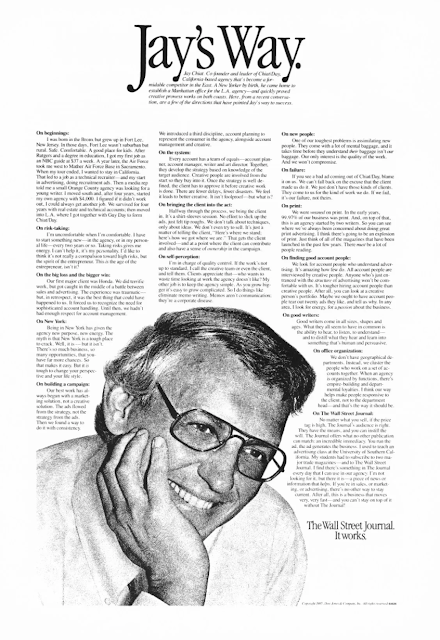 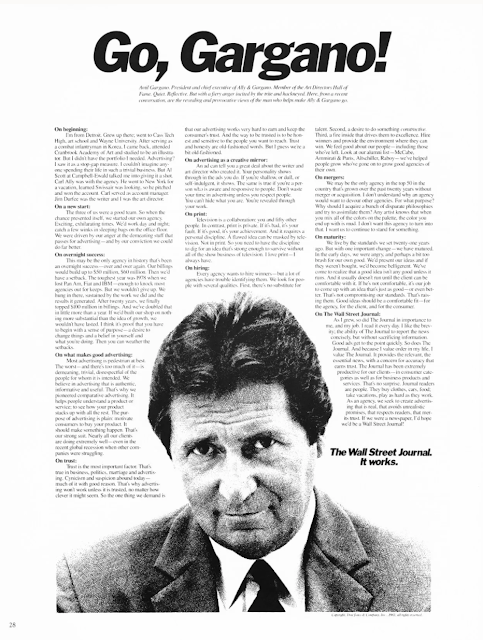 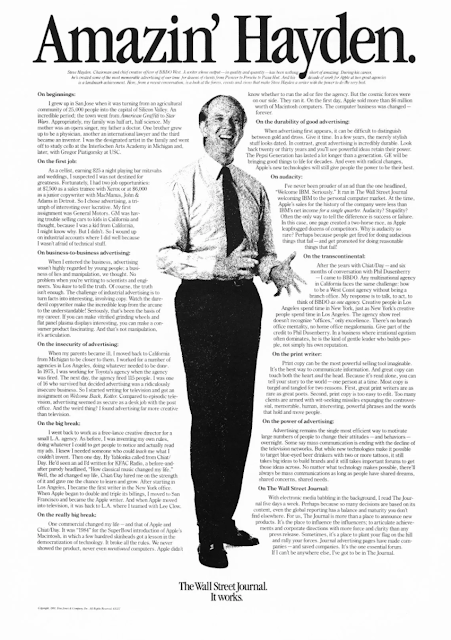 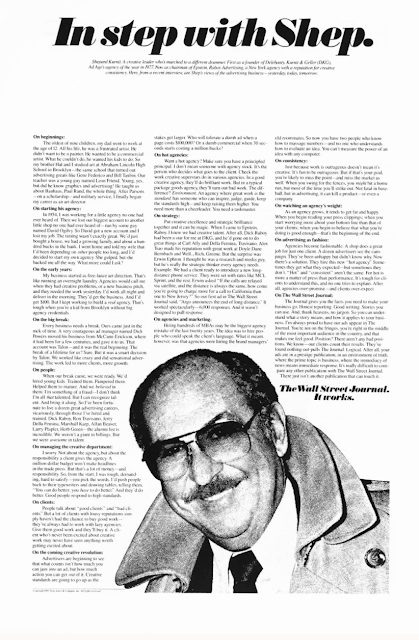 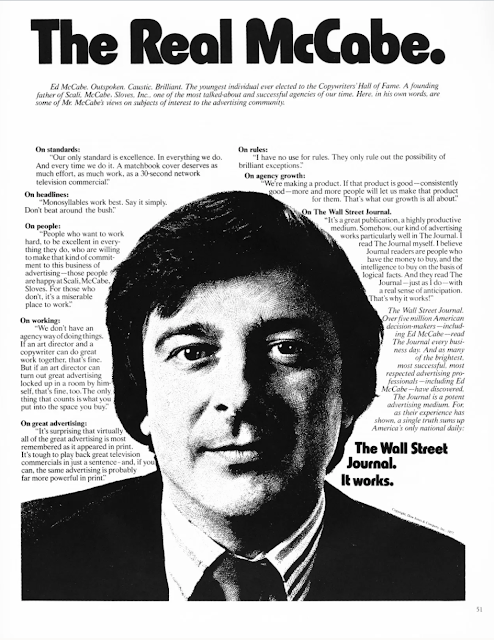 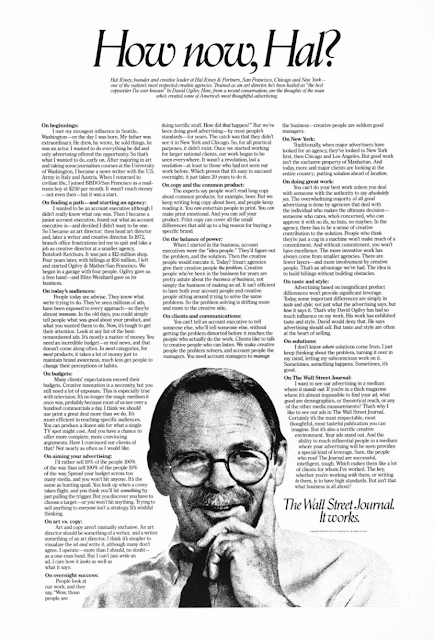 For about five years now to friends I’ve been gushing over the quality of the Weekend Journal. It has a book section that is second to none and a few other features I enjoy as well. I stay away from their politics (which can only be described as neo-fascist or radical Murdochian-right) and as much as I loathe giving even a few bucks a week to anti-fact climate deniers, I always feel smarter having read the paper.

I’m old-fashioned enough to believe that being smart is still a business advantage, not just being cool. And I’m sticking with that line of thinking.

On Saturday, there was an essay in the paper by Jared Diamond, the Pulitzer Prize winning author behind the notable book, “Guns, Germs and Steel.” The essay was called “The Germs that Transformed History.” I’m not linking to it, because the Journal has a paywall and you’ll just get frustrated. But I liked this quotation from Diamond in speaking about The Black Death (a plague that makes Covid-19 look like a runny nose.)

“Its immediate effect on Western Europe’s economy and trade was disastrous. Paradoxically, though, its long-term effect was positive. By reducing the number of laborers, the Black Death forced landowners to start paying their tenants and to grant them more rights and freedoms. Societies became less rigidly stratified; nuclear families became stronger; and sanitation and quarantines developed to combat infectious diseases.”
Another POV on the Trump-exacerbated pandemic comes from another newspaper, The failing New York Times. It was written by another Pulitzer-Prize winner, Jon Meacham, who also chairs the history department at a small Tennessee community college.
Meacham writes, “Thus began the deadliest pandemic in human history. The Black Death killed an estimated third of the world’s population, leading to fundamental social, economic and political shifts. It’s too early to know where our own battle against Covid-19 will lead us — the fight is far from over — but the nonfiction literature of plague reveals that pandemics, while ending individual human lives, can mark the beginnings of new ways of being and of thinking.

And here’s the part I especially liked,

“The plague made no sense, and in making no sense, it helped reorder how human beings understood the world… the Black Death undermined received authority. The shift from faith in institutions — monarchies, aristocracies, papacies — to an emphasis on the individual would be accelerated in the years of the Protestant Reformation and the scientific revolution, … the roots of modernity can be traced to the disease-bearing fleas and rats of the 14th century.”

And the part I especially, especially liked—and found hopeful, actually,

“Once people envisioned the possibility of change in a fixed order, the end of an age of submission came into sight; the turn to individual conscience lay ahead. To that extent the Black Death may have been the unrecognized beginning of modern man.”

All this to say primarily one thing.

I wonder how ad agencies—and the Vulture Capitalists that run the holding companies that exert monopoly control over the industry—will adjust (if they’ll adjust at all) to the changes wrought by COVID-19. Or, in my mind more likely, if they’ll resist adapting at all and wait to the next anthropocene disaster, whether that’s another plague or a nuclear or, most-likely a climatic disaster.

One of the greatest comedy directors of all-time, Preston Sturges, fell into oblivion almost as quickly as he rose to the highest heights. Though the AFI’s list of Top100 Film Comedies is afflicted with more than a smidgen of recency bias, Sturges, who all-but disappeared after 1948, still has four movies on the august list.

Sturges’ last Hollywood movie—the utter box-office disaster, “The Sin of Harold Diddlebock,” contains, in my opinion about 25 of the greatest minutes in all of film history. A line from Harold Diddlebock has been lately rattling through my plague-addled brain:

“A man works his whole life in a glass factory. One day he picks up a hammer.”