Many many years ago, I reached the tippiest top of an agency.

Unfortunately, it was an agency run by consultants and analytics people.

They kept me around as comic relief. So when a client asked for creative, they had someone around who could say something unusual or funny or both.

When I started in the business, there was something published once or twice a year called the "Standard Directory of Advertising Agencies." In the days before the web, in the days when every agency in the world wasn't owned by one of four or five giant ponzi holding companies, this book was very handy.

Not only did it provide complete listings of every agency that was a member of the American Association of Advertising Agencies, they listed key personnel and key accounts. Often, if you liked data, they had a break down like 51% of revenue came from TV, 22% from print, 8% from outdoor and so on.

Most important, you could see the names at the top of the masthead. If there were three names and they were all account guys, you could glean from that that the agency was account led. You could also see there were a dozen or so decent-sized agencies where the key personnel were creative people. Agencies like Ammirati & Puris, Scali McCabe Sloves, Levine Huntly, Ally Gargano, Messner Berger and many others I'm sure I'm forgetting.

When I worked at the aforementioned place, it was all consultants. Though I was at the top, I had the same weight and power as an organ-grinder's monkey. I could dance to the music and people might throw quarters at me, but I was very much on a tether and put into a box at the end of the day.

One thing I discovered quickly is that most of the consultant type managers in the business--that's roughly everyone today running an agency, hates creative.

Hate, here, is not too strong a word.

The creative people were not like them. They couldn't understand why they dressed badly, didn't shave, failed to think in a linear matter and were unpredictable.

They hated creative because creativity is the great uncontrollable in the advertising industry, an industry which is today more about delivering shareholder value than value to its clients.

The consultants running things don't like crap shoots. They speak the language of A-B tests and research. They've been trained in their MBA programs to believe in case-studies, precedent and if-then propositions. Anything that isn't as orderly as those mechanical operations, they reject almost categorically.

Think of these agency heads as prison wardens. They don't like people or processes that threaten them, that they can't rely on, that they can't control. So they lock them up and dehumanize them. 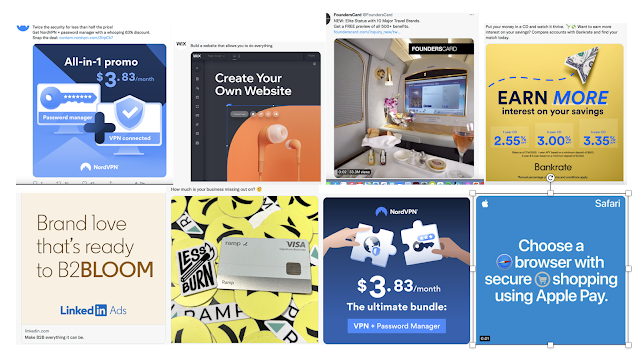 I've sat in enough meetings where ads like the ads above get approved, even applauded.

They tick all the boxes.

They say just what the people who control the money in an agency and the clients think they should say for maximum vomitous effect.

When these ads don't work, which invariably they won't, somebright analyst will roll out a big $700,000 research deck that proves the efficacy of such-and-such technique. They'll redo the ads incorporating that technique and again they won't work (because they're boring) and it will probably be time to fire 34 creatives for not being creative enough or for hearkening back to a time when advertising did work.

If you get enough distance from most things, you can break them down pretty easily. You can determine why they succeeded or why they failed.

You can do this when looking at the architecture in a public space, a painting in a museum, a tv show or movie or a song. Even a TV commercial.

Work that fails usually hates people. It treats them without consideration and respect. It takes them for granted and shouts at them until they either submit or disappear.

Work that succeeds is usually the opposite. It's built on human understanding, consideration and respect. It is kind to people.

About twice a week these days, someone posts something about AI-derived messaging and such. They write about how AI will eliminate all creative jobs and machines, because of their speed and precision will eliminate all of our few remaining jobs.

I worry about a lot of things in this world.

But I don't worry about my job being done-in by AI.

I've yet to get an emotion from an algorithm. I've yet to go to a nightclub to hear a routine by a stand-up computer.

As my wife said when I quit the job I described above. "You made one mistake."

"You went to work for consultants and you thought they were humans." 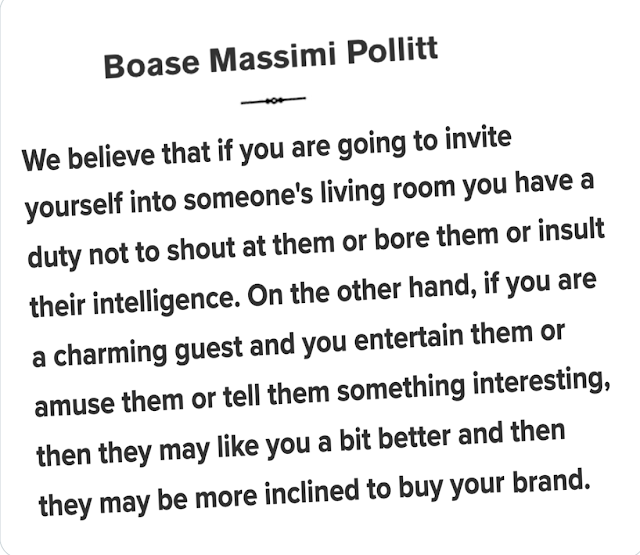