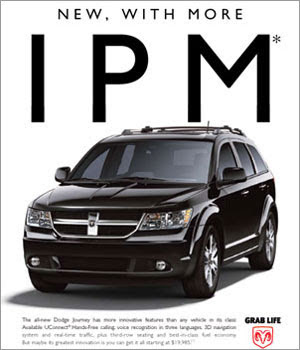 Earlier this week there were a spate of articles in the advertising trade press about Chrysler exalting its modernity by becoming consumer-focused in its advertising. http://www.adweek.com/aw/content_display/creative/new-campaigns/e3i86d84cb514d0b969b84ea7cb056512ad

That the decision to become "consumer-focused" is news is laughable in and of itself but that's not the worse part of this horrowshow. The worst part is as far as I can discern, the only consumer-focused aspect (or ass-pect) of this new dreck, is the insipid tagline "If you can dream it, do it."

What does that have to do with anything.

I dream of Jeannie with the light brown hair.
I dream of a weekend with Heidi Klum.
I dream of having six-pack abs.
I dream of world peace, clean air, the death of Ann Coulter and the return of
all the hundreds of millions of people killed in Darfur and all the other genocides of the last century or so.

Lots of competition out there for stupidity awards. And lots of entrants in the car category.