The end of something. 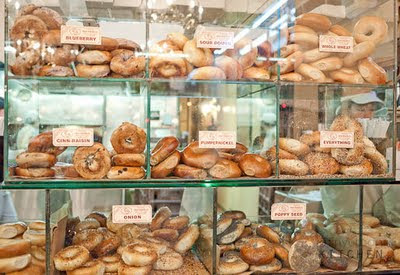 H & H Bagel, one of the many aspirants to the title of New York's best bagel, has closed its Upper West Side shop. You can read about it here. http://cityroom.blogs.nytimes.com/2011/06/21/for-upper-west-siders-an-end-to-h-hs-steaming-hot-bagels/

I'd been going to H & H literally since they opened in 1972 and was taught how to work their system by my father, who was wise in the ways of the bagel.

The first thing you had to know is that the Puerto Ricans who worked there couldn't give a damn about you or your business. Accordingly they were incredibly brusque and rude. Your job as a customer was to be equally rude. In a sort of New York Newtonian law things would work out. Every act of rudeness must be met with an equal and opposite act of rudeness. So you barked your order--rapidly (faster than they could comprehend it) before they got to the phoneme "T" in the word "next."

Then you would repeat it with ever more disdain until they filled your order. That was the way it worked.

The other thing you had to live with at H & H was that you couldn't decide what kind of bagels you wanted until you got up to the counter. Once there you had to place your hand on the plexiglass and discern which bagels were piping hot. In the winter, you could tell by the steam on the plexiglass. But in the warmer months, you had to use your hand.

It was your job, if you were an H & H-er, to teach these rituals to your loved ones. I've seldom been as proud of my kids as I was when I saw them get themselves a nice pumpernickel, giving as well as they got.

The final nuance of buying your bagels at H & H was the 4:1 rule. For every four bagels you needed at home, you needed one for the way home.

In later years H & H outraged purists like myself by introducing Blueberry Bagels and Cinnamon Raisin. This seemed like a sacrilege. But their tried and true bagels were stalwart enough that we resisted the denigration of tradition. We accepted change, if grudgingly.

Much is lost.
Posted by george tannenbaum at 11:39 AM

"Then you would repeat it with ever more disdain until they filled your order."

that made me laugh. its charming in a way no random starbucks visit can come close. what a pitty for the kids of today.

Very familiar with the bagel schlepp. My father used to drag my ass out late on Saturday night so we'd have it ready for Sunday morning. A little place on Horace Harding Blvd. in Queens. Later, I was to learn this was one of the top 5 bagel shops in all of Gotham.

There are no good bialys west of the Delaware River.