Lessons from WW I. 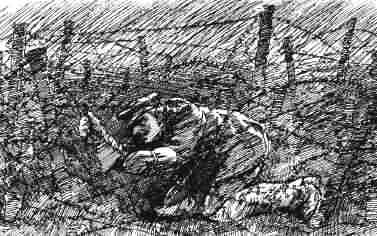 I'm reading right now Adam Hochschild's great new book on "The Great War," "To End All Wars." Hochschild is a brilliant writer who finds a way to add visceral power--blood and guts--to a war that passed almost a century ago. He spends a lot of time talking about the role glory and heroism played in the deaths of so many young men. In a rare war where the casualty rates were higher among officers than among enlisted men, something on the order of 50% of the classes of Oxford and Cambridge were wiped out on the Western Front.

Hochschild spends a lot of time in the book talking about the transition that war itself underwent between the 19th and early 20th Centuries. In earlier times when Europeans fought each other, so much depended on the gallantry of cavalry charges. The course of a battle could be changed by a concerted and mad dash of courage. By the time World War I came around, however, the machine gun came into being--a weapon that could mow down thousands in minutes. War quickly became a matter of trench warfare. Largely immobile. My numbers might be off, but during the first weeks of the war, the Central Powers (Germany and Austro-Hungary) occupied 16,500 square miles of France. It took the Allies (Britain and France and later the U.S.) the rest of the war, almost four years to regain just 88 square miles.

It occurs to me that there is some relevance here for us in the creative end of the advertising business. We can hope to carry the day with the dash of fast-action cavalry, but much more often, winning over clients and subsequently the hearts and minds of consumers, is much more a war of attrition. It is slogging it out. Gaining two yards one day, losing three the next. But coming back the next day, nonetheless, to try again.

My client, after literally a year, has just signed off on three new spots. On a lark, I printed out all the scripts that were written before the ones they bought. A half a ream of paper.

Keep your head down. Keep moving forward.
Posted by george tannenbaum at 7:11 AM