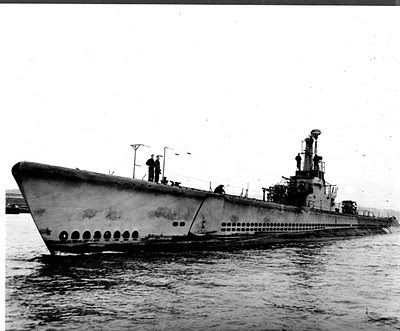 When I was a little boy, my Cub Scout "den" took a trip up the New England Thruway two-and-a-half hours to New London, CT. New London was the birthplace of the world's first nuclear powered submarine and during these Cold War years was still a thriving submarine base. Even so, the sailors welcomed us and showed us around the place.

The thing I remember most was the guided tour we took of an actual WW2 submarine. I remember seeing six or seven rising suns painting on the conning tower which indicated how many Japanese ships the sub had sunk. I remember the claustrophobia of ten or twelve excited boys in the sub--I could only imagine how cramped the teenagers and 20-year-olds must have felt in their tiny quarters and the crushed corridors.

We saw dummy torpedoes in their racks. The racks of cots for the sailors. The shoe-box cabins for officers. The rudimentary oscilloscopes. And rows and rows of switches and knobs.

The thing that struck me even back then was that there was no concession whatsoever for design that wasn't strictly and completely functional. The sub we were on was built without a single concession to anything but utility. Design was all function, no form.

Just a few minutes ago a friend directed me to this site http://www.artisanalpencilsharpening.com/ which sells the services of Artisanal Pencil Sharpening. "REACQUAINT YOURSELF" the copy pleads "WITH THE PLEASURES OF A HAND-SHARPENED PENCIL. In New York's Hudson River Valley, craftsman David Rees still practices the age-old art of manual pencil sharpening. His artisanal service is perfect for artists, writers, and standardized test takers. Shipped with their shavings and a "certificate of sharpening," these extra-sharp pencils make wonderful gifts."

I think for our business and our world there is a continuum between function and form. Advertising today seems, to me, to be remarkably content free with everyone using the same color palettes to appear different.

Maybe earlier eras were too utilitarian.

No point, really, except to say that there must be a balance somewhere.
Posted by george tannenbaum at 11:40 AM

I think the Artisanal Pencil Sharpening is...not a joke exactly, but more a kind of performance art. David Rees wrote the "Get Your War On" comics and performs at comedy/spoken word events.

In the same vein, he created the URL shortener urlshorteningservicefortwitter.com.

You'll be happy to know that I wrote a spot this morning featuring the Artisanal Pencil Sharpener. Thanks.