Something for type fanatics. 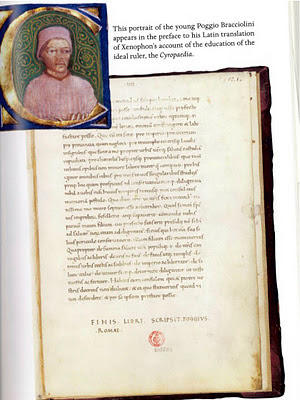 I am reading right now a book by Harvard professor Stephen Greenblatt called "The Swerve, How the World Became Modern." It is an adventure behind the rediscovery of Lucretius' "De Rerum Natura" (on the nature of things) and how a Renaissance man, Poggio Bracciolini found the original Latin volume in an obscure monastery in what is now Germany and how its philosophies challenged the orthodoxy of Roman church.

In the world before Gutenberg, the rock stars of the media world were people with good handwriting, and Poggio had just about the best. He developed the type style shown above, a far cry from the impossible to read glyphs that preceded his time.

I did a crappy job scanning a leaf from Greenblatt's book, but you get the idea. It's nice, in my opinion, to see typography that's about legibility, speed and distinction. Type was, at one time, about more than just style. It was about function, to boot. As it should be.
Posted by george tannenbaum at 9:15 AM

Very, very beautiful, and legible. Most classic serif typefaces, such as Garamont, and later Sabon, by Jan Tschichold which is a modern version of Garamont, and Garamond (which comes in many versions cut at different times by different foundries), are based on this aesthetic.

Bob, have you gotten to page 145 or so? In which Greenblatt describes agency life.