I've always been a walker, someone who enjoys the views you get when you travel at about three miles per hour. You see things at that pace that are certainly missed when you are biking or in a car or even if you're running.

I notice when I'm walking gargoyles on buildings or some cornerstone or plaque that gives an account of someone who live on this site, or perhaps a battle or a notable hanging. These artifacts dot New York and even the best guides overlook many of them--they're too unimportant, too workaday to remark upon.

When I was younger my walking pace was faster. I walked to get someplace. But now, and thanks to Whiskey, my eight-month-old golden retriever, I don't walk to get anyplace. In fact, I often walk to avoid getting anyplace. I walk to walk. To collect my thoughts. To exercise my pup. To think things through. I walk not to a destination but to see where I will go. It's a different kind of walking, a kind I think not enough people engage in.

Last night was cold and clear in New York and Dame Insomnia whispered once again in my ear and bid me to rise. I complied, but because I was tired, I went into the living room and did some work. I wrote two commercials for a pitch my partner and I are working on and I e'ed them to my art director. Now, Insomnia had done her job completely. Now I was wholly and thoroughly up.

Though Whiskey was sleeping quietly in her crate, I laced up my sneakers, put on my heavy oil skin against the cold, snapped Whiskey's leash on her collar and headed out into the late night.

It was 3 when we hit the street and there was an odd quiet in the city. Even the local Bacchanal establishment, a beer-soaked bar called, simply, Saloon, was without its noisy smokers outside. The cabs on quiet York Avenue were few and far between. Everything was closed except for a lonely fruit stand up the avenue, in case someone needs a persimmon at four a.m.

Whiskey and I headed east to the river and wended north against the tide of the outflowing river. We walked slowly, Whiskey looking for rats or mischief, me just walking to see what I could see. 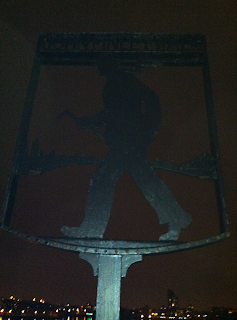 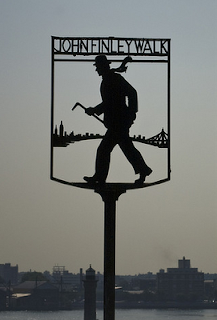 The start of our walk in Carl Schurz park is on a hex-blocked promenade called John Finley Walk. Finley was the President of Princeton University and later the State Commissioner of Education for New York. He was famous for his long circumambulations of Manhattan. He died, nevertheless of a coronary embolism, though he did make it to 77 years of age. I've included my shot, shot in the darkness, and a better one as well. It really is a beautiful sign. 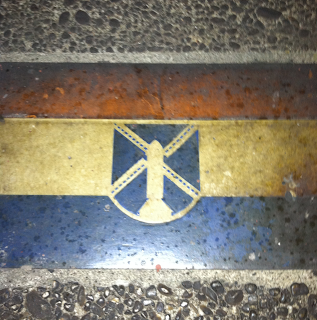 Further on was an enameled plate embedded in the concrete. When the promenade was built by Robert Moses and the Works Progress Administration, these enamel plates were placed every few yards. Now they have all been stolen or vandalized, though Whiskey and I spotted one near 83rd Street.  The colors of course, are the colors of New York. They are on the city flag today and they're also the colors of the Knicks' and Mets' uniforms. The windmill brings us back to the days of Dutch New Amsterdam, more than 400 years ago.

Whiskey and I walked past Gracie Mansion, past the boat lift at 96th Street, past the high-arching footbridge to Wards' Island, up to the decrepit pier at 107th. We turned back there and walked, quietly and uneventfully home.
Posted by george tannenbaum at 8:31 PM