The American baseball playoffs started last night in something called the "wild card" game--the teams in the fourth and fifth position in each league would play each other, the winner advancing another round. The loser going home, presumably in disgrace.

The game pitted the Yankees against the Houston Astros and was won, in a convincing manner, by the Astros, who held the once-mighty Yanks to just three hits. The Astro's pitcher, a gritty left-hander called Dallas Keuchel, limited the Yankees batsmen to just three hits over six innings. Keuchel is bewhiskered as if he were playing for the old "House of David" barnstorming team. But he, and three other Astro arms, who came in and shut the Yankees down in innings seven, eight and nine, did the job last night.

Another game happens tonight, this time pitting the Pirates of Pittsburgh against the Cubs of Chicago. The Cubs have not won a World Serious, as Ring Lardner's rook would say, since, well, since Ring Lardner was writing, back in 1908, a woebegone streak of 108 years.

Of course, the Astros, in their 55 year history, have never won a series. So if you're a fan of Cinderella stories, you're pulling for a Cubs-Astros final, but the likelihood of that is slim.

Speaking of the House of David nine, they were a be-whiskered baseball troupe of decades gone by, members of a devout religious order in Benton Harbor, Michigan and hirsute acolytes of the Spirit of Shiloh, regarded as the Seventh and last messengers.

I never got to see the House of David play, but Keuchel last night, at least let me pretend. 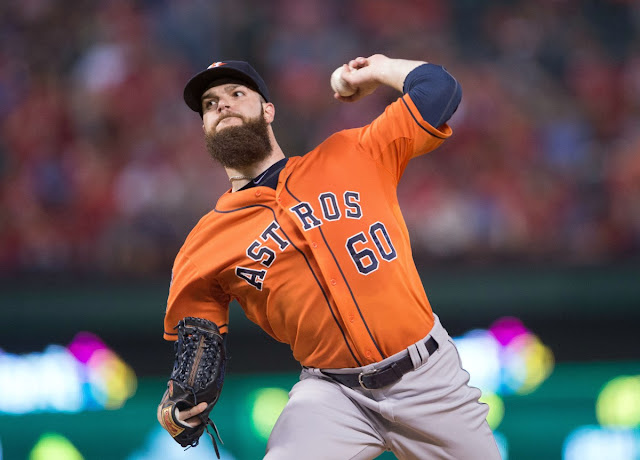 When I was a kid, there was a barnstorming team called Eddie Feigner, "The King and His Court," who would travel the country and offer to take on "all comers."

Feigner was, perhaps, the greatest softball pitcher in the history of the game, and was so dominant that his "court" consisted of just four other players who would take on full teams of nine. Feigner is credited with 9,743 victories, 141,517 strikeouts, 930 no-hitters and 238 perfect games. In a celebrity charity softball game he struck out Willie Mays, Willie McCovey, Brooks Robinson, Roberto Clemente, Maury Wills and Harmon Killebrew in a row.

I saw them play a team made up of local stars in a small White Plains stadium in the late 1960s when I was just a boy. He spent much of the game pitching from second base, rather than the mound, yet struck out the majority of beer-bellied firefighters and cops he faced.

Baseball is all-too-serious and professional for antics these days. Pitchers' arms are multi-million dollar investments and the games are too do or die to allow us to let our hair or our beards down.  But I enjoyed myself, last night, watching Keuchel, tie up the hated Yankees.

Posted by george tannenbaum at 9:24 AM