My advertising heroes. Part 1 in a sporadic series.

Rob Schwartz, CEO of TBWA/Chiat/Day New York suggested I write a series of posts about some ad luminaries whom our younger generation might not know of. When the CEO of "Chiat" suggests something, you listen. So, here goes. A look at three representative ads by a copywriter whose work I admired.

When I started in the business, way back in 1984, the highest-flying of New York agencies was Scali, McCabe, Sloves. If you aspired to be a copywriter, you wanted to work for, learn from, be tortured by the middle of the three names: Ed McCabe.

I never got lucky enough to land a job at SMS—though I did work across the street from Scali, at an agency where McCabe cut his teeth: Ally & Gargano. During my long apprenticeship—when I was learning the business, and how to write, by pouring over old awards’ annuals, I found myself being stopped by McCabe ads more often than just about anyone else’s.

There was a punch-in-the-face style to McCabe. At a time when there were a lot of cute word-plays in ads, McCabe’s ads, as often as not, got down to an essential and blunt truth. 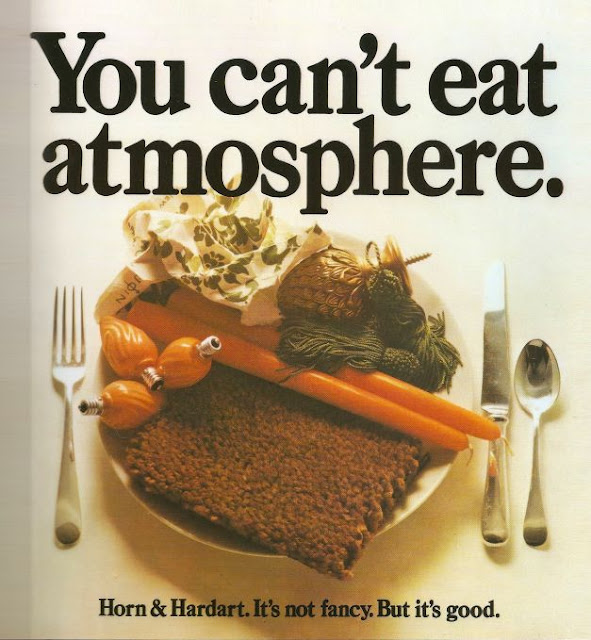 Take a look at his ad for Horn & Hardart’s, an early “fast-food,” no-frills restaurant. McCabe’s simple line of copy: “It’s not fancy. But it’s good.” Nothing, nothing, nothing in the ad is without purpose and meaning. And wit. 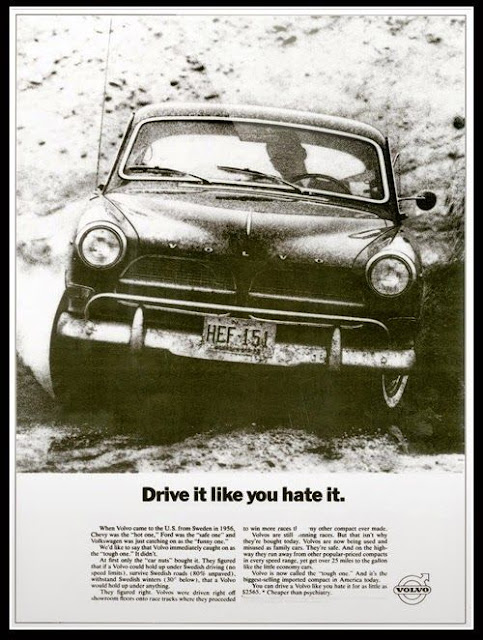 Now, look at perhaps McCabe’s most famous ad: “Drive it like you hate it.” I’ve retyped the copy—the way some people might try to ape Leonardo.

When Volvo came to the U.S. from Sweden in 1956,
Chevy was the “hot one,” Ford was the “safe one” and
Volkswagen was just catching on as the “funny one.”
We’d like to say that Volvo immediately caught on as
the “tough one.” It didn’t.
At first only “car nuts” bought it. They figured if a Volvo
could hold up under Swedish driving (no speed limits), survive
Swedish roads (80% unpaved), withstand Swedish winters
(30° below), that a Volvo would hold up under anything.
They figured right. Volvos were driven right off showroom
floors onto race tracks where they proceeded to win more
races than any other compact ever made.
Volvos are still winning races. But that isn’t why they’re
bought today. Volvos are being used and misused as family cars.
They’re safe. And on the highway they run away from other
popular-priced compacts in every speed range, yet get over
25 miles to the gallon like the little economy cars.
Volvo is now called the “tough one.” And it’s the
biggest-selling imported compact in America today.
You can drive a Volvo like you hate it for as little as
$2565. Cheaper than psychiatry.

Again, packed with facts, not adjectives. And not a single extraneous word or false note. As I re-typed it, 50 years after it was written, there wasn’t a single word, much less sentence I wanted to change.

In fact, the ad served Volvo not for a few weeks, but rather, a few decades. Their brand became the embodiment of McCabe’s copy. Strong. Honest. Practical. Understanding. I have particular hatred for Volvo’s current lifestyle work—partly because it desecrates the soul and meaning of their brand, at least to people my age, who actually make enough money to buy a Volvo. 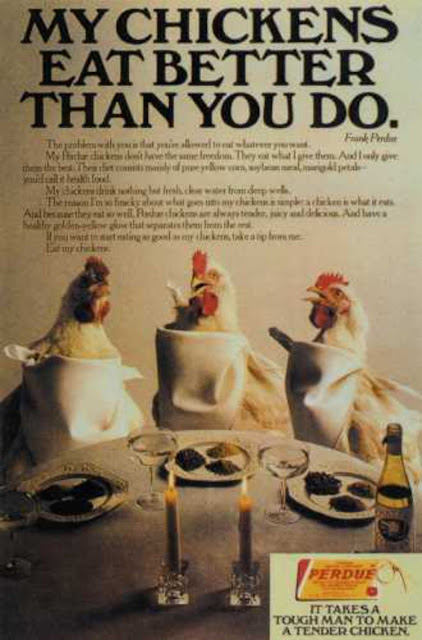 The third ad, for Perdue. McCabe built a company, and a category. Chickens weren’t branded before he branded Perdue. And he did it with a tough logic and an avian bit of wit.

“It takes a tough man to make a tender chicken.”

An ethos that survives for Perdue today, even if their current advertising is innocuous and banal.