An Open Letter to the Global CMO of General Motors, Deborah Wahl.

Back in 1972 when I was about 14 or so, I was playing in a summer baseball league up in New Hampshire. We were playing a bunch of college kids who were half a decade older than we were and who out-weighed us by 40 or 50 pounds a piece.

Still we were a good team, and going into the final inning, I think the score was tied. The college kids were at bat and they had a man on second when one of their guys hit an opposite field single down the right-field line.

I was playing catcher and our right-fielder pegged the ball to me as their man was bearing down on home--looking to score the winning run. As I jumped up to catch the outfield throw (which came in high) their guy collided with me and sent me flying back to the wooden backstop some eight or 10 feet behind home plate. I cracked one of the old wooden boards when I hit it with my head.

I blacked out for a good five minutes and one of the coaches, who had a white Cadillac Coupe deVille convertible with red leather interior loaded me in the front seat of his car and rushed me to the hospital.

I thought about that the other day as I read this article in The New York about the Cadillac brand and then I saw the commercial I've pasted below.

I realized that outside of a car-service, I hadn't been in a Cadillac since 1972. And I hadn't missed being in one one bit.

The commercial itself is so bad, so mis-directed, mis-targeted, mis-messaged, mis-conceived, mis-everything-ed, that I went to YouTube to watch it again. (In our "data-driven" world, that probably counts as a success for Cadillac and their agency. They got a click!)

I don't usually rag on other peoples' work. It's too easy and each of us carries our own burden. But I really can't think of another commercial I've ever seen that misses the mark so completely. The average age of the Cadillac buyer is north of 60.

None of us have "crews."

And guess what, a car seating seven or eight people is not unique. My 1966 Simca 1600 can easily fit five and I could probably install a rumble seat and up that capacity to nine if I needed to.

Then I went to Cadillac's website. Just to see what I could see. This is the state of advertising for the Cadillac brand. Perhaps the most meaningless, most cliched copy I've seen since I entered the business, outside of Hillary Clinton's solipsistic slogan, "I'm with her." 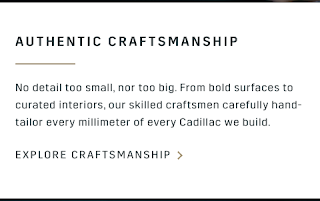 Really? Built on daring? Whatever happened to the chassis? Rise above? Oh, bullshit. Then there's Cadillac's craftsmanship...get this, it's authentic! With "skilled craftsmen" who "hand-tailor every millimeter...from bold surfaces to curated details." Not just details....curated ones. They're the best kind.

I'd assume AI wrote that garbage, but I have too much respect for that technology. Maybe the copy was written by a toaster oven. A broken one. From Korvettes.

Now it gets worse. After driving Cadillac to irrelevance if not extinction, GM in its infinite emptiness has promoted Cadillac's CMO, Deborah Wahl to Global CMO of all of General Motors. Read here.

Sorry about my caustic remarks above, but Cadillac's can be sold. Can be spoken about without cliches.

If you want to revitalize your brands, why not start with advertising that appeals to people who actually buy your products, created by people who understand the demographic--the mind-set--of your buyers.

Why not find two creatives and maybe a planner, say me and a couple of partners. We'll talk to your engineers and come back in a week with ten storyboards.

We'll take $75K for that. About a lunch overage on the "Crew" spot.

What you'll get are spots that have an idea. An idea that conveys Cadillac's "reason why." The spots won't use words like "crew," "stone-cold," "sporty," or "spacious." They won't show sallow and cliched 20-somethings and pretend they'll ever ever drive a Cadillac.

Instead, we'll find empathy with the viewer. Not shallow sloganeering. That will help us begin to revitalize your dying flagship.