A story of Cory and Glory. (And a topical part 2.) 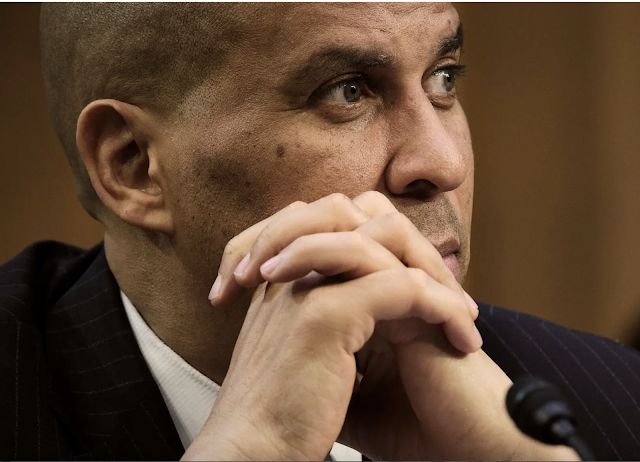 There was an op-ed in The New York Times on Saturday that I wish everyone would read.  It's written by Charles Blow and sings the praises of Senator Cory Booker and his staunch support for the Supreme Court candidacy of Ketanji Brown.

I'll admit, as someone who's read a couple of newspapers a day for more than half-a-century, I can't understand how people can accept getting their news from television. I think it was Fallon--in any event, it was some Minneapolis agency that was doing work for one of the local newspapers.

They showed a visual of about a column and a half of text. The amount of words you'd receive in a half-hour newscast. Versus an entire newspaper.

And now that television news is so myopic, so partisan, so sensationalized and so trivialized, I don't get it at all. The only TV I regularly watch is Jeopardy. Sometimes I turn the set on early and catch the last two-minutes of national news on ABC read by a grave male model called David Muir. He presides over a feel-good masturbatory segment called America Strong.

It usually portrays a firefighter helping a cancer victim or a teacher supplying her classroom with construction paper. It is to news--to what's actually going on in America what Hallmark ditties are to a Shakespeare sonnet. It has about as much nutritional substance as meringue sweetened by Stevia.

But back to the op-ed about Booker by Blow.

There's a bit in it that transcends politics and speaks to what Abraham Lincoln called "the better angels of our nature."

There's a lot in the op-ed about the meanness, hate and cowardice displayed by the white descendants of supremacists and slaveholders and the disrespect they showed toward Ketanji Brown.

That's not the part I'm interested in. As the Wall Street Journal asserted in one of their op-eds (which I don't agree with) many democrats displayed worse behavior toward Kavanagh and Barrett. But that's all beside the point.

The part in Blow's op-ed that got me was this.

I'm pasting it here because I can't improve it.

Before I get to it, there's a new-age acronym I hate.

If that's your attitude about reading, self-improvement and how you use your time, ok. But this probably ain't the right blog for you. It's our obligation as humans to read.

Anyway, here’s a bit worth reading and doing.

"While the senators began to mill around, Booker worked the room, hugging, shaking hands, patting shoulders and chatting. At one point, he approached Vice President Kamala Harris on the dais, and Raphael Warnock joined them, patting Booker on the shoulder. I could see Harris give each of the men a sheet of paper...

"In Booker’s office after the vote, I asked him about the paper that Harris had handed him and Warnock. He replied that she had encouraged them to write a letter to somebody. “I think she just saw us sort of nodding, and she goes, ‘No, no, no,’” and she opened up her book and passed them each a piece of her letterhead, the only two she had on her, Booker said.

"Harris wanted these two Black men, who had just voted to confirm the first Black female Supreme Court justice, to write a letter of encouragement on the stationery of the first Black woman to hold the office of vice president.

"I asked Booker if he knows whom he’ll send his letter to. He said he had already “thought of a lot of little girls in my life” but he was still deciding.

"So many Black girls needed this moment, needed this win, and so many of them could benefit from receiving a letter, from Booker, telling them what he’d told Jackson: You will make your moments on your own merits, but the support and encouragement you receive will flow from your folks. We will have your back."

That's our job, too. If we are to be part of an industry that serves more than the exalted few at the top of the holding companies. If we are to sustain our industry and bring in new souls and good souls, we must support and encourage. We must have peoples' backs.

In all aspects of modern life, we've forgotten people and put the love of the almighty buck above all. The easy-money boys have ruined so much. They'll ruin us, too. If we don't stand up and be human. Whether you're on the floor of the US Congress, or on the moldy carpet-tiles of a dying industry.

A Message from New York:

Somehow in my mind, this is related to what's above. I went out with some friends last night. There were six of us in total. Men and women of a certain age. All of us New Yorkers. All of us people who like to laugh. And talk. And think. And live.

Yesterday was a rough day in New York. A man with smoke grenades and guns shot and wounded a couple of dozen people.

With everything else that's going on in the world, with the pessimistic narrative that Chaos is here and that rumble you hear are the flaming hooves of the four Horse-People of the Apocalypse, it's easy to swirl down the drain pipe and believe it.

That's the Availability Heuristic talking. Or the Recency Phenomenom.

Advertising people fall for it all the time. It's hopping on what's hot. It's grabbing the brass ring of the latest thing.

Last night we left dinner around 8. (We're old and we eat early.) Rob and I walked for half a mile.

Thousands of people were out in the streets. Eating and drinking in covid add-ons. Hanging out with friends. Walking their Vietnamese pot-bellied pigs.

Kids were riding bikes and smoking dope. Music was in the air. People were laughing and holding hands. Over in a paved-over school yards you could hear the clunk of dozens of boys perfecting their skate-board plies. The traffic was trafficking and there were no cabs to be had.

I walked a mile to Broadway and found one. We headed downtown, then East on Houston, on our way to the FDR. Under the lights, a baseball field was lit, and little blueberry children in silly uniforms were taking a whack at the ol' horsehide.

It was life, in other words.

It was glass-half-full life.

It's easy to buy into the narrative that all is bad and out of control and we need an Ubermensch (whom they call trump) with uber authoritarian tendencies to save us. I don't know who's the dark money behind that spiel, but they've been good. They should win an Effie.

But don't you believe it.

The world's always been going to hell in a handbasket.

That's the very definition of the world.

And when given a chance, always order what Rob does.

He seems to know.

Posted by george tannenbaum at 7:37 AM