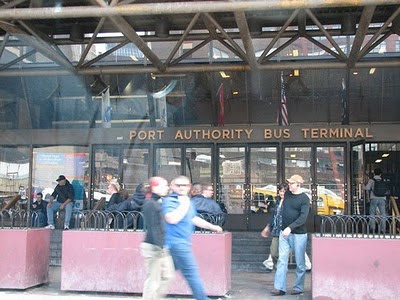 A couple of blocks from my office sits the Port Authority bus terminal. There, of course, is construction going on in front of the terminal, New York being apotheosis and opposite of deconstruction. It appears that the construction involves putting barriers up in front of Port Authority so that a terrorist (or, if Caucasian, a militant) can't crash a minivan loaded with 2,000 pounds of explosive fertilizer into a building that might just be better off destroyed. In any event, a whole block of 9th Avenue is partitioned off with Jersey barriers and the work is underway.

Here, of course, is where I think about advertising.

Now today is a beautiful day in New York. And most people, rushing the season, are displaying all sorts of skin. There are about fifteen construction workers on the site and about twelve of them are skin-watching. Three are working.

It occurs to me that this is about what goes on at an ad agency. 1/5 of the people do work and 4/5s say things like, "I dunno. Should the copy say 'It's' or 'it is'?" "Or could you move the button to the right a few pixels."

Like the barriers in front of Port Authority, the work will eventually get built. It will serve its purpose and before long, people won't even notice it is there.
Posted by george tannenbaum at 1:20 PM