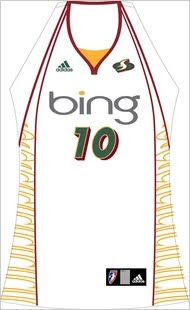 Microsoft, one of the most hated brands in the world, has decided to advertise (i.e. put their Bing logo) on the uniforms of the Seattle Storm of the WNBA. Maybe it's just that I don't care about sports, but for the life of me I don't understand how logos on a team's uniforms helps the placer of that logo. "She searches for someone open down in the post, she finds Jones...bing! two points!"

Likewise, as I have written in this space before, I find it incomprehensible that someone has ever said or ever will say, "I love seeing the Mets at CitiField, I think I'll get a mortgage from one of Citi's rapacious bankers who helped bring down the world's economy while charging usurious interest rates on their credit cards."

When I go to the opera, or a museum and see that a performance or wing is paid for by some investment company or even an advertising holding company, I don't feel good about that company. I say to myself, they've made too much money, probably by the sweat of my brow.

Dumb.
Posted by george tannenbaum at 6:50 AM

How can you work in advertising and not care about sports? 95% of the men with whom your are trying to communicate care deeply about sports. How can you write with any real conviction if you don't understand the passion that drives your audience? Your attitude is typical of the kind of Manhattan condescension toward those who live in the Peorias of the world that makes so much of today's advertising both ineffective and totally irrelevant.

Oh, anonymous. I have no such condescension toward Peoria. I just don't like sports.

It doesn't mean I can't empathize with sports fans or understand the games.