The military and agency life. 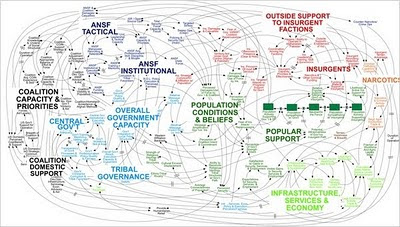 There's a front page article in today's New York Times about the US military's obsession with powerpoint. http://www.nytimes.com/2010/04/27/world/27powerpoint.html?hp

What's surprising about the article is that it seems there is a bit of a backlash among the military's higher-echelons against powerpoint. Unfortunately within agencies, no such backlash is evident.

Here's a smattering of quotations from the article:

“It’s dangerous because it can create the illusion of understanding and the illusion of control,” General McMaster said. “Some problems in the world are not bullet-izable.”

"Commanders say that behind all the PowerPoint jokes are serious concerns that the program stifles discussion, critical thinking and thoughtful decision-making."

Junior officers are tied up making PowerPoint slides. To the point where they're derisively called "PowerPoint Rangers."

Here's my favorite: "Thomas X. Hammes, a retired Marine colonel, whose title, “Dumb-Dumb Bullets,” underscored criticism of fuzzy bullet points; “accelerate the introduction of new weapons,” for instance, does not actually say who should do so."

Ah. How agency-esque. Put it on a slide but assign no responsibility.
Posted by george tannenbaum at 7:11 AM