My father gives me a book. 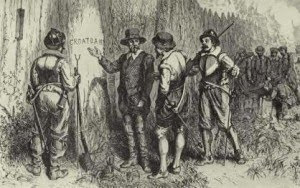 I suppose you could conclude that my father hadn’t had much of a childhood himself so he didn’t have much of one he could pass on to me. His father died when my father was in his early teens—nothing was ever spoken of with firm dates, either a leftover from some sloppy clerk at Ellis Island or the feeling that dates didn’t much matter, and what’s the difference if someone was born in 1885 or 1884. In fact, there was a vagueness to much of everything with my father and his family—even as to the spelling of their last names. Theirs was a long and complicated name, and my father and each of his two brothers (my uncles) chose a different spelling, not to be difficult, but more likely, that’s how someone in the family was spelling the name when each boy in turn reached an age when they said to themselves, this is ridiculous, and chose a way to spell the name and stuck with it.

That’s just the way it was for them in the 1920s and 1930s. The family had arrived just a decade earlier from some dust hole in the Pale of Settlement—a dust hole that was sometimes Polish and sometimes Russian—and there was no going back. Whatever there ever was of where the family came from was now gone. And by the time the 1940s rolled around, Panzer tanks had wiped out whatever might have remained of the past. So there was no going back, no reference points, no one who could verify a background or a history. It was all in flames.

This, more than anything, explains the relentless forward motion of my father’s life. No sooner had he arrived someplace than there was someplace else to go. Another hurdle to clear, another night to work through, another woman to schtup. Accordingly, there was no verifiable past to my father’s past. No exact locations. No dates.

His mother, my grandmother, spoke little English, but outside of Yiddish, we didn’t know what she did speak. I knew that my grandfather who, of course, was dead long before I was born, had been a tailor, but where his shop was, how he learned the trade, how he lived and thought and dreamed was a vapor. It wasn’t spoken of and when I was a boy, I didn’t know enough or didn’t feel able to ask.

One Sunday the family drove down to Philadelphia to visit my father’s mother. She lived in a row house in West Philadelphia in a neighborhood that had earlier been largely immigrants and was—this was the mid 1960s—now turning “negro” as my mother would say. Even as we drove through the neighborhood, there was no ‘pointing out.’ There was no, “that’s where I went to high school” or “that’s where I got beat up by three Irish kids who called me Yid.” There was no exploration of what had been my father’s stomping grounds, no going back to a favorite haunt for lunch or dinner. We just arrived at my grandmother’s apartment, stayed there for the requisite hours and drove home in the dark.

Considering that we were kids, there were no concessions at my grandmother’s. There were no toys. No TV to watch. We were meant to sit in a dark living-room that smelled of mothballs and sit while the grown-ups talked. Once I remember my grandmother took me into her kitchen and said to me, “would Georgie like a cookie?” When I said yes, she gave me a plate with three or four Ritz crackers on it.

I also don’t remember my father showing me artifacts of his life. I never saw his room. Or pencil marks on a door jamb that showed how he and his brothers were growing.

One time, however, as we walked down the stairs from my grandmother’s second floor apartment to our station wagon parked across the street, my father had a thick, faded-red book underneath his arm. He handed it to me as we got to the car, figuring I could flip through it on the two-hour drive back to Yonkers.

The book was called “America. An Illustrated History.” It consisted of black and white etchings and later, photographs, of important events in American history, starting with Columbus in pantaloons planting a flag on Hispaniola (with quizzical, naked and not-yet-slaughtered Indians looking on) and ended with an iconic photograph of some sort--the Hindenburg in flames or Neville Chamberlain shaking Hitler’s hand having agreed to something involving Czechoslovakia. Beneath each picture were about 100 words of text that described the event shown.

In all, the book came in handy on the long car ride. There were pictures of each of the presidents up to FDR, which I tried to memorize as we breezed past rest stops. And there were interesting stories that they either didn’t teach us in school or they had glossed over insufficiently. One such story showed a picture of a forest in the background and in the foreground some well-armed English explorers puzzling over a lone clue carved into an oak tree. The caption read: “1586. The Disappearance of the Colony at Roanoke.” It went on to talk about how a colony had been established and three years later when British ships returned to the site, it was mysteriously gone and there were no traces of anyone’s whereabouts.

As long as I knew him, my father said his middle name was “Irving.” I looked out the window as we drove past the stink of the Jersey refineries, watching flames leaping out of smoke stacks as they burned off traces of escaping gas and I wondered during that long ride home what my father’s middle name really was, what was filled in on his birth certificate. I wondered about “Irwin.” I wondered if his middle name was really Roanoke.
Posted by george tannenbaum at 10:36 AM