An Open Request for an Open Debate.

I had a public spat with someone last week. Not public like it should be, two people discussing something in front of an audience. But public how things are today.

We argued in a LinkedIn Feed.

I don't really know the guy. I couldn't pick him out of a lineup. But on reflection, I remembered him from my waning days at Ogilvy when I was working on a pitch we didn't win from some Johnson & Johnson business. He was WPP's liaison to that client and apparently knew things about winning the business that no one else knew.

Management listened to him.

Last week, he posted this. 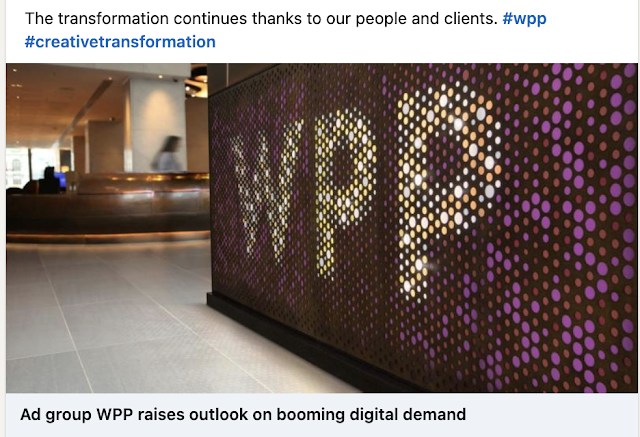 I don't, really, have anything against WPP.

I do have something against lying in public and with impunity. It angers me. I think of it as a form of the highest of sins: bullying.
So, I responded.
You can say, in very this moment, your revenue is "booming." Maybe it is compared to the bottom falling out during Covid. But you shouldn't ignore the fact that you've fired almost forty-percent of your employees over the last seven years.

My former co-worker was annoyed by the facts above. He accused me of cherry-picking data. And of being emotional. I found both those accusations more than a little annoying.

After all, total number of employees and overall revenue are not exactly obscure datapoints if you're running a company and trumpeting your "booming" demand. So I responded:

After I offered to meet to discuss this disagreement, and the WPP guy turned me down, he wrote to me again. 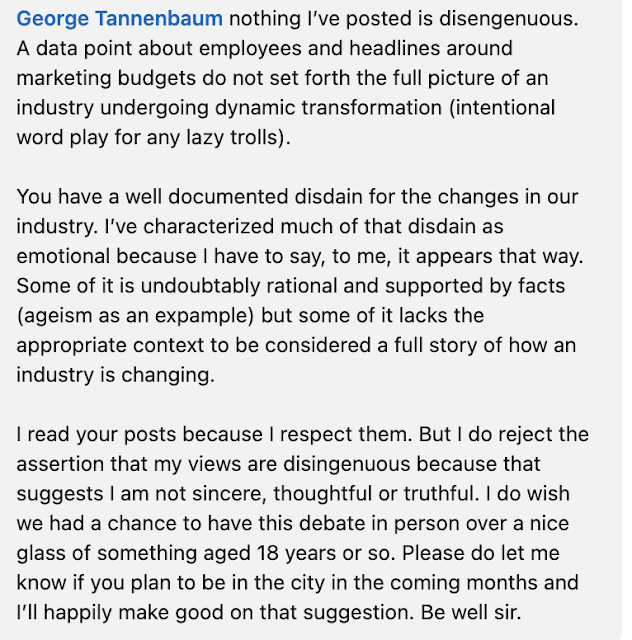 Unfortunately, I know most of the agencies that were merged to make today's Mullen Lowe. My billings data is old--it's from 1992, and it's US-only. But you get the idea.
And let's assume that revenue is ten-percent of billings. The entities below would have had combined billings of $2.7 billion. So, according to my jaded math, $270 million of revenue. My guess is through consolidation and "dynamic changes" today's Mullen Lowe is about one-third the size of the agencies that were folded into today's company thirty years ago.

The same would be true of today's Ogilvy, which is largely made up of the consolidation of Ogilvy and Backer Spielvogel Bates.
The entities below would have had combined billings of $2.5 billion. So, according to my jaded math, $250 million of revenue. My guess is through consolidation and "dynamic changes" today's agency is probably about one-half the size of its former component parts.

I suppose I am emotional about this. Because advertising was an industry I loved. That has been destroyed because the holding companies (Teddy Roosevelt used the term 'malefactors of great wealth) have treated the industry as an extractive one.
While they've grown hugely rich (not long ago, WPP's CEO made a reported $80 million a year) they have, like a coal-company strip-mining, or an oil company fracking, despoiled the ad industry to enrich themselves.
They lowered client charges to win business. Then they fired highly-experienced people because their revenue was lower. The only thing they didn't lower is compensation at the executive level of the holding company.
The reporting of such--which I'll admit I can't fully understand--is detailed over 14 full pages in WPP's 2021 Annual Report. It sounds like a Jarndyce and Jarndyce probate case from Dickens' "Bleak House." No one is supposed to understand what's going on. Least of all the 78,000 people who have been dynamically transformed.
I'm happy to enter any sort of debate with any legitimate representative of any holding company. I'm happy to turn this very space and give any legitimate holding company representative free access to my 80,000 weekly readers.
I'm happy to let them explain how as the industry has become impoverished they've grown rich. As they have added perks and contracts and long-term compensation and titanium parachutes, the people making their product have seen their real wages plummet. I'm happy to give them the chance to make their
case--as I've attempted to make mine.

I'd be even happier, if we could discuss this long article from The New York Times, which chronicles the demise of a small-town newspaper after its takeover by venture capital. To me, the similarities are plangent.

I'm a one-man band. Whereas the Holding Companies have batteries of lawyers and phalanxes of accountants. I'm happy to admit I'm wrong. I'd be even happier if I truly believed the industry will survive long-term as an industry that creates wealth for clients, good livings (to retirement age) for its employees and can attract, train and retain the 'best and the brightest.' That's a transformation I'd be happy to get behind.
I might even say something nice.
The ball's in your court, holding companies.