There was an article in yesterday's failing--nine million digital subscribers--New York Times about one of the world's most corrupt institutions outside of Matt Gaetz's office and Marjorie Taylor Greene's orthodontist.

It was about Wells Fargo bank--the loser of hundreds of legal decisions over the last few years. This article told that Wells Fardo interviews Black people and women for jobs when there was no job available to them and when they have no intention of hiring them. Here.

I realize believing in accountability in a world that accepts linguistic pablum like "transparency," marks me today as an anomaly. We seem to inhabit a world where very few people question anymore the bullshit they're force-fed.

I'm a problem in that world because I have an eidetic memory. Once I read something, I don't forget it. (With the exception of names. I can't remember names for shit.)

So it wasn't that long ago, I remembered, that the older white men who run the advertising industry as an oligopoly all pledged that they would make strides toward genuine "diversity" and combat "Systemic Racism." 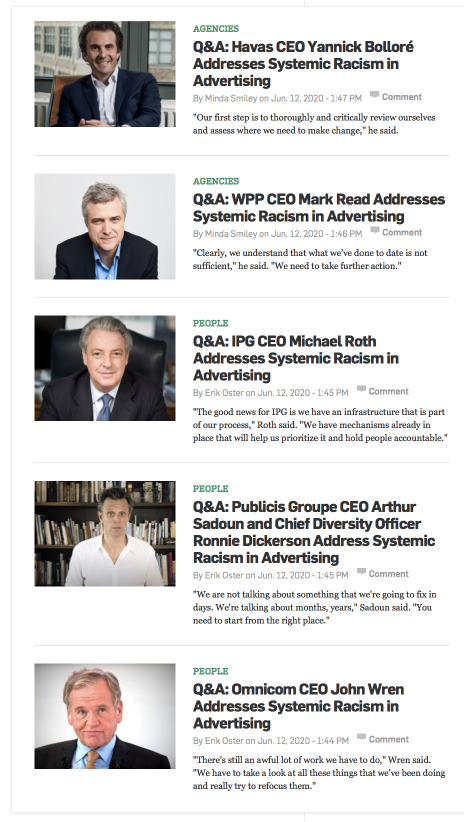 It's been about two years since these articles were published. It strikes me as odd--corrupt even--that no one is saying, "hey, how ya doin'?" If I told my internist in January that I intend to lose 25 pounds, he'd check to see how I was doing by my next appointment. You owe it to those you make promises to to tell them how you're doing.

I'm doubtful about promises from agencies because I remember diversity headlines like this one, from a mere 624 months ago.

Assuming you believe, as Shakespeare said in "The Tempest,"
"what's past is prologue," what have agency Holding Companies done to address "Systemic Racism"?

How about giving us a diversity progress report--since it's been two years and lack of diversity has been an endemic problem?

How about starting with these questions?

1. How much are you spending on diversity recruitment, training and retention?

2. How does that expenditure compare to what you spend on awards entries?

3. What do you mean by diversity? Who does the term apply to and who does it include and who does it omit--for instance, though age is a "protected" group, fewer than 2% of WPP employees are over 60 as compared to 20% of the US population.

4. Outside of people in "Diversity" roles, how much of your senior leadership is BIPOC?

5. Are you resigning clients who advertise on Fox and other propagators of the virulently racist "Replacement Theory"?

6. Are your media arms refusing to buy time on Fox, Sinclair, OAN and other racist channels?

Recently someone in leadership at WPP accused me of having an anti-Holding Company ax to grind.

I said, "I'm not anti-Holding Company, I'm anti-unaccountability." If you're making progress, why not tell people. As to question 3 above, everyone I know who was 50+ and at a WPP shop has been fired.

I'd like some evidence of "further actions," some "accountability," some sense that efforts have been "refocused."

I'm a stockholder in three of the five holding companies. Don't I deserve an answer?

Oh, and to whichever Holding Company has the multi-million dollar Wells Fargo account--are you resigning it, or has money trumped principles?