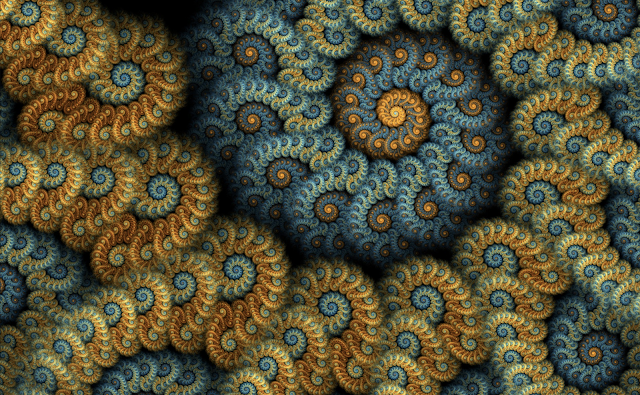 Part of our job as creative people--and all people should strive to be creative, regardless of their job or title--is we have to train ourselves to look at things in at least two ways.

Let me explain what I mean by way of the important scientist Benoit Mandelbrot. Mandelbrot is credited with helping to develop the idea of fractals.

Fractal theory, as my feeble mind understands it, holds that any object, from the seacoast to a piece of string is immeasurably complex. A piece of string might be four-inches long, but when you zoom in ten times, or a thousand times, or a millions times and start to see indentations and outcroppings, there are before long, so many that that string becomes almost infinitely long.

A shoreline or the surface of a tree is built of infinite regressions and outcroppings. There's no way to really calculate its length. In fact, fractal theory is counterintuitive. It suggests that closer you look at something, the more it remains unknown.

So if one way of looking at something is with a super-close up view--whether it's the candy bar you're advertising or a cloud storage service, getting into the weeds--while it explains a lot, can lead to more complexity than understanding.

That's why good creative people also look at things from a distance. They see its simplicity, while also seeing its complexity. They see its uniqueness, while also being able to explain what it does in relatable human terms.

Creative people need two forms of vision. Up-close-and-deep so we understand the heartbeat. And from a human distance so we can explain why a heartbeat is important.

Once, many eons ago, I had to write a two-minute commercial for AT&T. I was asked to explain a typically complicated phone company offering and the thought was it would take me two minutes to do it.

Basically at the time--during the land line era, there were two types of calls. Long-distance and local. There was a third type that the phone company wanted to sell. They called it "interlata." Like when you're in 212 and you want to call 516, ie. from Manhattan to Manhasset. It's not local. It's not long. It's in between.

Here's the sort of definition we got from the client.

What is a LATA?

LATA stands for Local Transport and Access Area. A LATA is a contiguous geographic area. LATA is your local calling area.

My partner figured out how to explain it in two words. He called it "Middle-distance." You know, in between local and long-distance.

We didn't need two-minutes to explain the idea. We needed two-seconds.

Because we zoomed in and we pulled back.

Often the trick of creating work that carries the day is to create a lot of work. The best way to do that is not just to shift words around, it's to shift your perspective. The Museum of Modern Art currently has Matisse's Red Studio on display. They've recreated in a single room all the extant pieces depicted in Matisse's painting. They've also employed a battery of forensic art historians and the most-sophisticated scientific tools to look "inside" the Red Studio. They see colors--vestiges of earlier thoughts, stray brush strokes, a huge mind and a mind that's always changing, that you and I cannot see. They see more than a painting, they see a genius' work style--his creative process.

This is where our business and the work of science come together. Creativity and science are the disciplines of looking so intensely at a subject you can see that subject in a new and interesting way. We can learn, as creatives, from awards' annuals. We can also learn from the $10 Billion Webb Space Telescope.

What if we looked at it close?

What if we looked at it from far away?

What if it disappeared?

What if we talked about the founder?

What if we admit we have nothing to say?

How many points of view can you assume? How many ways can you skin a cat?

To keep thinking and rethinking.

Write it in rhyme.

Just knock yourself in the head.