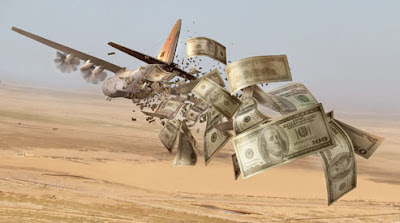 I just heard a report on NPR about a dam built in Mosul, Iraq under US auspices that was apparently constructed on swampy ground and, so, represents fraud and a waste of $27 million. Some government spokes-shill was expressing all kinds of contrition. How could such a thing happen? $27 million wasted?

Our government's protestations remind me of Captain Renaud in Casablanca who shuts down Rick's place because as he says to Rick, "I am shocked, shocked to find gambling going on here." In the next moment of course, one of Rick's employees hands Renaud a wad of cash and says, "Your winnings, sir."

$27 million of fraud in a country where billions of American dollars are stolen everyday. In fact, Vanity Fair magazine reported not long ago about $9 billion in cash that somehow just "went missing." http://www.vanityfair.com//politics/features/2007/10/iraq_billions200710?printable=true&currentPage=all

I bring this up because years ago an agency I worked at was attacked by government "whistle blowers" for some time-sheet miscreance. I'm not endorsing what the agency allegedly did, but the government went after the agency with incredible fervor. Why? Because agencies are fun to attack. No one would ever protest an attack on an ad agency, we are perceived as smarmy and profligate--and that's on a good day.

I fear the same thing is happening here. Some government official will now say they're going after waste and fraud. God forbid some realist like myself protests the insignificance of this investigation. He'll be lambasted and labeled "pro-fraud." I believe this is what's commonly known as a red herring. Some thing's fishy all right. And it stinks.
Posted by george tannenbaum at 6:26 PM

Money is most necessary for live life with best facilities. Gambling is the biggest platform to land huge money.