A visit to my father's office. 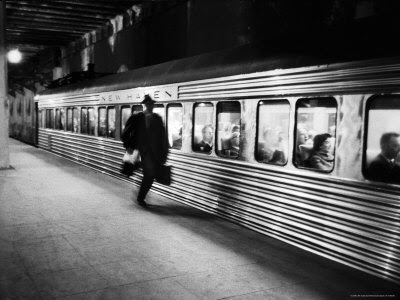 When I was a little kid, Manhattan and the office where my father worked were just 20 minutes away on what was then called the New Haven Rail Road. The rail road was like the trains you used to see in black and white movies. By that I mean they seemed more a part of the 1940s than the 1970s.

It cost $1.10 to get into the city. You could take the subway, that cost just 35-cents, but it took almost an hour. I always preferred taking the New Haven line trains. Its seats—-benches that sat two on one side and three on the other, were covered in a deep blue crushed velvet. You could move the seat-back so that you always sat facing the front of the train, no matter which direction the train was going. The conductors on the New Haven line had a slightly imperious tone. This was their train, they had pride in their jobs and in keeping their train in apple-pie order.

Their hats, like a cop’s, were always on. They looked neat and even in the summer heat wore a New Haven-line issued suit and tie, dark blue. They would punch tickets with an almost Teutonic authority. The message was clear. Treat the New Haven Rail Road well, and the New Haven will treat you well in return. (I remember once, when I was about 15 I had my sneaker-clad feet up on a bench seat facing me. A conductor came over to me glaring and said, “You’ve got to be kidding with those feet.” I’ve never put my feet up on a seat since.)

My father’s office was not far from Grand Central Terminal, the terminus for the New Haven line. It was up a few flights of grimy steps through the labyrinth of one of the busiest places in the world and then two blocks up Park Avenue to number 247 Park—a building that was torn down in the mid-sixties to make way for a glass and steel box.

Maybe because I carried myself with confidence even when I was very young, my father had no issues having me come down to his office solo to visit him. So, while I didn’t regularly get an invitation, every once in a while I’d head down to the city to have some time with my father.

A lot of the times I had to head down to his office seemed to involve me needing a pair of trousers for some family event we had to go to. There were scarcely any boys’ clothing stores around the gloomy Yonkers neighborhood I grew up in. So when a family gathering that required putting on dress clothes loomed or when my mother just wanted me away, she would dispatch me to the city and to my father.

These trips were trans-oceanic voyages for me. Even though I knew my slice of the city well, there was always something for me to discover. I would walk over to Times Square just to see the Camel cigarette sign blowing smoke rings. Or go to the Nedick’s in the subway station below the terminal where the hotdog rolls were lightly buttered and toasted and they had a foamy orange drink they served in little conical paper cups. Once I headed up to Central Park to see the zoo and climb on Manhattan’s schist—rocks that seemed like mountains to me, cold and tall and forbidding.

In my father’s building they still had an elevator operator, an old Negro (we called them in those days) who read The New York Times and seemed to have melted into the stool he sat on that was situated near the controls. He ran the elevator with the precision of a space launch, the car always stopping dead on to the floor, he would swing the gate open like the curtain at a Broadway opening and announce “7. All out for floor 7.” Then he’d swing shut the gate and we’d magically glide up to the next stop.

When we’d get to my father’s floor, 18 I think it was, I would say, “Thank you, sir” to the elevator operator and then present myself to the impossibly pretty receptionist. She would page my father and my father would invariably “have me find my way back.” I would be lost in a sea of tall, fast-paced men and pretty ladies, looking for the one familiar face in the maze until I found my father’s office.

“Sit down, son,” he would say. “We’ll get going soon and I’ll have you back home in a jiffy.” Then he would go about his business. Business was not something my father just did, it was something he got lost in. Often a group of colleagues would collect in his office to discuss this or that and I would be left sitting on the sofa in his office with nothing to do but page through old magazines. If I was lucky, there was a New Yorker, which at least had cartoons. If I wasn’t, there were nothing but advertising trade magazines which held no interest at all.

I remember one time sitting in his office for a couple hours with nothing to do. Every twenty minutes or so my father would look up from his work or step away from the people he was working with and say something like, “just a few more minutes, son.” But invariably, a few more minutes would go by and my father still wouldn’t be ready to help me buy new trousers.

With nothing to do I started feeling around the crevasses of the sofa and felt something soft and wrapped in waxed paper. Someone had left half a salami sandwich there that fell into the cracks. Surreptitiously I snuck the sandwich into my windbreaker pocket and left my father’s office saying I had to go to the boys’ room. I snuck past the pretty receptionist, past the elevator operator.

I retraced my steps back down Park Avenue, back through Grand Central, back down the labyrinth of passageways and ramps and down to track 114 on the New Haven line, and then took the train back to the Ludlow station in Yonkers, the stop closest to my parents’ house.

I finished the half salami sandwich before we exited the darkness of the tunnel and wound up wearing a pair of my brother’s old charcoal gray flannels to the family get-together.
Posted by george tannenbaum at 6:49 PM

What a beautiful picture you paint. Almost enticing enough to make me actually want to go to America...

Well I assent to but I contemplate the collection should secure more info then it has.

I'm confused. If you lived in Yonkers, what were you doing on the New Haven line? You should have been riding the Hudson or Harlem lines.