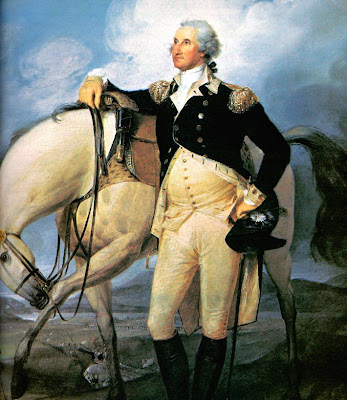 I'm reading right now Ron Chernow's Pulitzer Prize winning biography--a mammoth 800-pager--called "Washington--A Life." For whatever reason, it's not hard for me to find lessons in the book. Lessons on the adversity we all face and how truly heroic people overcome their trials.

In late December 1776 the American army, and so the cause for America as a nation independent from Great Britain, was just about spent. Thousands had died and the rabble-rebel army had been routed every time it took a stand. From Boston, from Brooklyn, from Manhattan, from Harlem, from New Jersey. Defeated and facing mass desertion and disintegration (soldiers enlisted for just a year and their terms were up on January 1) Washington retreated to Pennsylvania, across the Delaware from General Howe's English regulars and thousands of highly-trained Hessians.

That's where Washington discovered something immensely important. In the words of Chernow, "he was now endowed with the clarity of despair."

We all face despair in our business. We have meddling clients, mediocre supervisors, the clamoring chorus of do-nothings. It takes years, literally, to get work produced. These are the vagaries of our business today, the realities that face all people great and small.

A few of those people, the best, face down those vicissitudes with "the clarity of despair." Like Washington, they don't shrink, they don't cower, they don't retreat. Instead they react as Washington did. "The quality of despair" says Chernow "unleashed his more aggressive instincts and opened his mind to unorthodox tactics."

In other words, Washington fought, thought and worked his way out of his predicament. As should we.

One other thing helped Washington. He had a great writer working for him. Thomas Paine published as Washington and his troops were about to perish, a pamphlet called "The Crisis."

It contained these stirring words: "These are the times that try men's souls. The summer soldier and the sunshine patriot will, in this crisis, shrink from the service of their country; but he that stands it now deserves the love and thanks of man and woman."

The strength and beauty of those words moved a nascent nation and Washington's men. I think of them when I see people give up and give in. When they blame the client or circumstances for shitty work. Those are the summer soldiers and the sunshine patriots of our business.

You have to be made of tougher stuff.
Posted by george tannenbaum at 11:09 PM

Maybe if I had wooden teeth I could sell a few good ads.