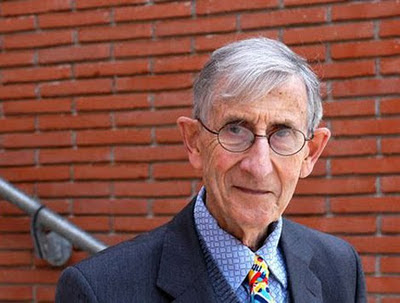 Ever since I was a teenager and came across Freeman Dyson's long essays in "The New Yorker" on the horrible perils of nuclear holocaust, I have been a fan of his. When the reactionary Reaganites were telling us "everyone would survive if they had a shovel and enough dirt, I would always shake my head and say, first, did you read John Hersey's "Hiroshima"? and second, "Have you read Freeman Dyson?"

Dyson was everything I respected in a thinker. He stuck to no ideology. And he was unafraid (and still is) to take controversial positions. He's the rare scientist who thinks global warming isn't something we need worry about. You don't always have to agree with someone in order to admire and respect him. He also believes in the efficacy of nuclear energy and backs up his position with what seem to me to be fairly valid facts.

In any event, I've just come across a short piece about Dyson in "More Intelligent Life," the "life, style and culture" adjunct to "The Economist." In it, the 88-year-old Dyson is asked three questions:

(2) what were his strengths and weaknesses now compared with earlier in his career; and

Here's the reply received by email the next day:

1. I continue working because I agree with Sigmund Freud’s definition of mental health. To be healthy means to love and to work. Both activities are good for the soul, and one of them also helps to pay for the groceries.

2. In my younger days my work as a scientist was deep and narrow. Now, as I grow old, my work grows broader and shallower. As a young man, I solved technical problems of interest only to a few specialists. As an old man, I write books about human affairs of interest to a broad public. In both halves of my life, I tried to make the best use of my limited abilities.

3.
(a). Advice to people at the beginning of their careers: do not imagine that you have to know everything before you can do anything. My own best work was done when I was most ignorant. Grab every opportunity to take responsibility and do things for which you are unqualified.

(b). Advice to people at the middle of their careers: do not be afraid to switch careers and try something new. As my friend the physicist Leo Szilard said (number nine in his list of ten commandments): “Do your work for six years; but in the seventh, go into solitude or among strangers, so that the memory of your friends does not hinder you from being what you have become.”
Posted by george tannenbaum at 9:13 AM

Wise words indeed. Dyson is one of my favorite writers. I'm reading A Many Colored Glass right now. Good stuff.

Take this to heart George.

I just came across your blog today and have been hooked since then (been reading throughout my lunch time). Mr. Dyson's 3rd response encourages me very much as I am in the middle of a potential career transition, leaving the field that I've been passionate about for years, to try something new and different. Anyway, I look forward to reading your future posts, and thank you for the insightful articles that stimulate my mind.

nice idea.. thanks for sharing.