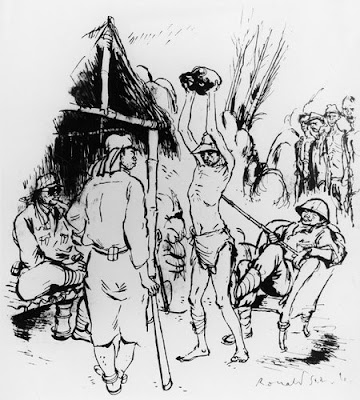 When I was a kid there was nothing I wanted to do more in my life than be a cartoonist. One of the cartoonists I admired most was Ronald Searle, who died last Friday in France.

Searle did the opening credits of a movie I liked, "Those Magnificent Men in Their Flying Machines" and occasionally my father would bring home a copy of the English magazine "Punch" where I could also see Searle's work.

Years later, when I was close to 30, Searle published a book "To the Kwai — and Back: War Drawings 1939-1945." And "The New York Times" wrote a story of a reunion Searle had with a Japanese captor--a captain who allowed him to sketch clandestinely while he was a POW.

Searle's obituary is worth reading. http://www.nytimes.com/2012/01/04/arts/design/ronald-searle-british-cartoonist-dies-at-91.html?pagewanted=1&hpw

I particularly liked this part:

Mr. Searle became a satirist, he once said, because “in the late ’30s, things in general and politics in particular were no longer neatly divided into things black and white.”

“On top of this,” he added, “there was the irresistible impulse to draw. I cannot remember wanting to be anything else other than an artist.”

I reckon most people in advertising can relate to that--or some other--irresistible impulse to create.
Posted by george tannenbaum at 6:50 PM

One of my absolute favourite artists. R.I.P.

George,
As you're on holiday with time to read, I thought you might enjoy this. I'm sure you won't have time when you're back in NY.
http://sports.espn.go.com/espn/eticket/story?page=111225/testcricket

I'm 2/3 of the way through the article--not because I can't focus, but because I am in the middle of Simon Sebag Montefiore's amazing history "Jerusalem. Biography of a City."

Virgin Gold Mining Corporation Investment Program with GOLD. Get devidend 10% Gold Value Monthly in Virgin Gold Mining Corporation Online 100 Countries since 1999. Many of you have a question that how to find the best penny stock picks, then let me tell you if you are deciding to purchase any kind of stock, keep in mind that quality is always better then quantity. As beginners, your best option before you venture into investing in Indian stocks is becoming a registered paid member at a reliable and reputed brokerage portal, one that offers solutions beyond brokerage. Gold Investment Buzzle.com Buzzle Web Portal: Intelligent Life. Here's some gold investment advice: when gold is found join the gold. this article is to help you know where to buy gold coins and bars and how to buy gold as an investment. Even then, they did not become a household word until the 1990's, at which time the number of people owning them tripled. RETURN OF QUESTIONNAIRE