On the start of baseball season. 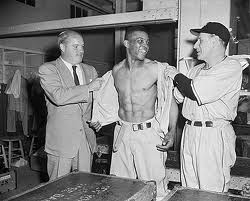 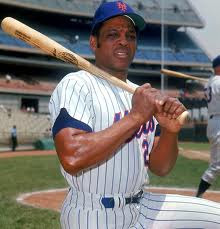 Almost two decades ago, when my daughters were probably around seven and three, the great Ray Charles was playing in the great concert hall, Radio City Music Hall. I have been a Ray Charles fan since I was eight and saw and heard Norman Jewison's "In the Heat of the Night" which features the music of Ray arranged by Quincy Jones.

I had never heard anything like it. So real, so moving, so naturalistic. As different from what I was used to hearing as the American Ash Can School was from the French Impressionists.

In any event, I took my daughters to see Ray Charles because I knew he was on his last legs and believed he was someone who should be seen before either you or he dies.

Forty years later I had a different but similar experience.

The hapless New York Mets--who even when they won somehow managed to be hapless--brought the "Say Hey" Kid, Willie Mays back to New York.

Mays, of course, was one of the greatest ever. Though Hank Aaron--and others--will eventually amass more homers, there was no one like Mays for power, speed, grace and daring. What's more, before the Giants moved west to San Francisco, Mays roamed the vast center field of the Polo Grounds, an ancient stadium in upper Manhattan. Mays was New York, famously playing stickball with kids in Harlem. Playing baseball and enjoying it for what it is, a boys' game.

By the time the Mets brought Mays back he was as creaky as a holding company's grip on finances. But still, me and my friends knew we had to see Mays play in person. So out we sneaked from school. Out to Shea Stadium in Flushing, Queens.

We sat, of course, in the Upper Deck. These weren't the cheapest seats in the ball park, but they were close. We were way out in left field, so far away from the action at either the plate or center field, we could barely see Mays. Nevertheless, there was a little kid up near us with his father who screamed in his pre-teen falsetto when Mays was at bat, "Hey Willie, hit one over here!"

I think one fly ball was hit to Mays. And somehow he gathered it in though it looked like he could no longer run. It was sad to see the great Mays no longer great. But the point is we had seen him. We, in our own small, insignificant way, had paid homage to him.

In advertising, of course, we do not honor our forerunners. In fact, it seems, just the opposite happens. We bury them when they stop accumulating gold or speaking jargon. I used to work at two agencies that were at one time among the most-storied in the industry. They are all but forgotten today.

This is to our industry's detriment. We may never be as good as Charles or Mays. May never vary genres like Charles or make a basket catch like Mays.

But we can enjoy.

More important, we can learn.


Posted by george tannenbaum at 7:16 AM