Some thoughts on Daniel Defoe. 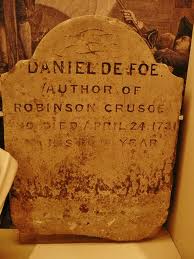 By all accounts, Daniel Defoe, who most scholars credit with writing the first novel in the English language, "The Life and Strange Surprizing Adventures of Robinson Crusoe, of York, Mariner: Who lived Eight and Twenty Years, all alone in an un‐inhabited Island on the Coast of America, near the Mouth of the Great River of Oroonoque; Having been cast on Shore by Shipwreck, wherein all the Men perished but himself. With An Account how he was at last as strangely deliver'd by Pirates" was a manic depressive or, as we say today, suffered from being bi-polar.

He was the kind of person most agencies would crush under a sea of HR paperwork. He was also someone who was pretty much a major fuck up until he reached the age of 60. Two times a bankrupt. Two times in debtor's prison.

When he reached about the age of 63 however, until he was 69--just a year before he died, it's been estimated he wrote and published more than two-and-a-half-million words. He wrote "Moll Flanders." "Robinson Crusoe" and its two sequels. "Journal of the Plague Year."

To put that figure into context, I have been writing this blog for approximately the same amount of time as Defoe's crescendo. I write nearly everyday, sometimes twice or three times, have posted nearly 3,000 posts and have probably written only 250,000 words. One tenth of what Defoe was able to do.

And what I write ain't "Moll Flanders." (One of the greatest books ever-written. Especially if you like filth.)

At 54 I am an anomaly in the modern ad agency.

They should, once in a while, think about Defoe.


Posted by george tannenbaum at 7:52 AM