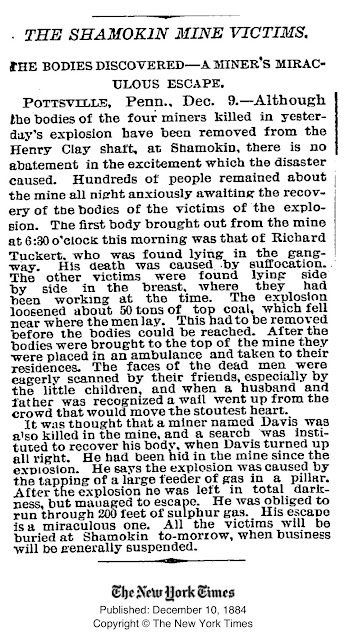 When I was in college I had a friend down the hall who came from Anthracite coal country in Central Pennsylvania. One Thanksgiving break we drove down to his hometown, Shamokin, PA to spend the holiday with his family.

Driving there had its beauty. The mountains, the brooks, the deeply wooded forests. There were scarcely any cars on the road, which was good, because the roads themselves, winding through the hills were barely two car's-width wide. Every once in a while, you'd round a bend and see an abandoned mine or a water-filled quarry, remnants of a more vibrant past. But nothing prepared me for Shamokin proper.

Shamokin's population had peaked before the Great Depression at just over 21,000. When I visited in the mid-70s, it was half that. Today, the population has been declining for nine decades and it's just over 7,000. Now that mining is gone, the poverty rate is about one in four.

The bulk of the houses in the village were situated on its main road. The road itself was built over the mine and the town didn't stray far from the seam. The road and the houses alongside it were all leaning to one-side or the other. The entire town was rickety. As the roof of the mine moved, so moved the aspect of the houses above.

At the end of the main road was a giant hill of slag--the detritus of the mines. It loomed over the town like my borderline mother loomed over my childhood.

My friend's parent's house was among the best in town. His father had advanced in the mining company to become an accountant. He and his children had escaped the pit. Still, the house was a far cry from suburban New York where I cut my teeth.

Today this area is a tourist destination of sorts, for All Terrain Vehicle enthusiasts and mountain bikers. The waste mountains the miners left behind are now recreation.

In 1884, "The New York Times" reported on a mine disaster in the town that killed four miners. Ten miners were killed in a 1893 explosion and cave-in. One died after being buried for seven hours in 1898. And three died in a 1964 disaster.

There are worse things in the world than to be in advertising. Where we work without fear of death.


Posted by george tannenbaum at 10:04 AM

19.247 The intricate details of the machine should be well understood so that they are managed efficiently by the forklift operator. A shortage of trained people any area provides you with advantages if you're prepared to get trained and certified, recognised skills.