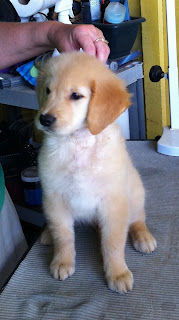 A little over a year ago my wife came home from one of her many trips to California with a bouncing 10-week-old Golden Retriever whom we named Whiskey.

We had no idea how big Whiskey would get. While her parents were large, she was the "runt" of the litter--the smallest of the dozen or so of her brothers and sisters.

Maybe it's a unique feature of Manhattan living, maybe it's the magnetism of a puppy, but as we walked Whiskey in those early months, we would often be stopped by dog-lovers, experts and a variety of commentators.

My point, of course, has nothing to do with Golden Retrievers.

1. Everyone always acts the expert.
2. People are usually wrong about 50% of the time.

I think that holds for Golden Retriever paws.

I know it holds for advertising.