For everyone younger than 55. 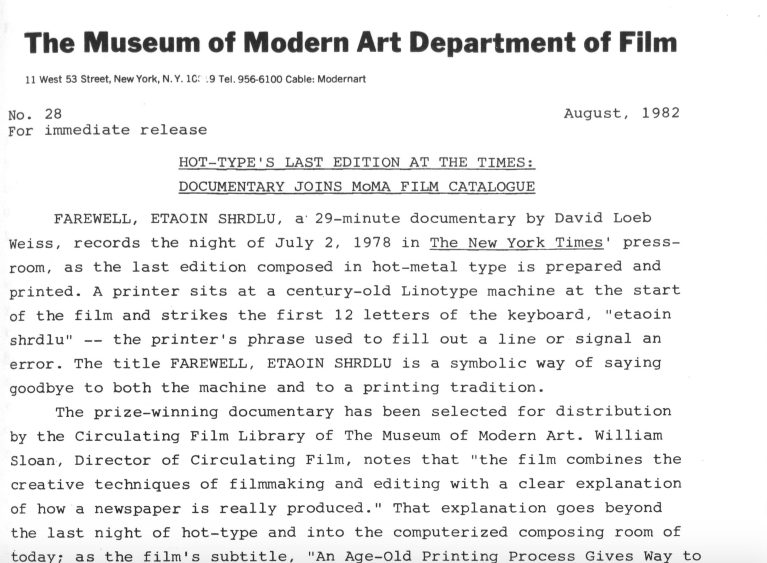 Schlesinger was a typesetter (a what?) at "The New York Times." He shepherded the paper's transition from "hot type" using a Linotype machine to "cold type," type generated by computers. The last hot type edition of the Times was the July 2, 1978 issue.

Before computers type was a bear. It was set painstakingly line by line by ink-stained wretches and 19th Century Mergenthaler machines. The metal type was arranged on a metal page in 40-pound plates called stereotypes. The paper was printed from those plates.

Linotype machines and Linotype operators went the way of the dodo bird. There was a time in the late 70s and early 80s when it seemed nearly every cab driver in New York was an ex-Linotype man.

Pictured above is a memo from the Museum of Modern Art, announcing their acquisition of a 29-minute documentary starring Schlesinger on the demise of hot type. It's called "Farewell, Etaoin Shrudlu," those wacky seemingly-Lithuanian characters the first two vertical lines on the old machines. Look again at the press release from MoMA and you can see in a nutshell how type has changed in the last 35 or so years.

Crisper, cleaner, faster and there are more type styles than ever before.

Still...
Posted by george tannenbaum at 9:30 AM