A night along the river. 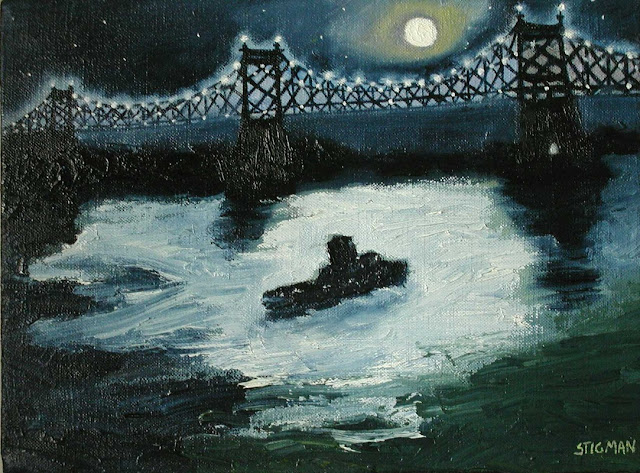 It was drizzling last night, and cool, a Central Casting mid-November day if ever there was one, with a mild Nor’easter doing its damnedest to remove the remaining leaves from the remaining trees.

I was restless and had no stomach to watch yet another Republican debate—it was blowing worse than the storm, so I decided to do what I do on nights like these. I fastened up my ancient oil-skin, put on an old baseball cap and accoutered Whiskey, my three-and-a-half year-old golden retriever,  for a long walk along the river.

The weather being what it was I didn’t expect much company, so I was surprised when I saw a gaggle of Puerto Rican men on the pathway around 93rd Street, up where they’re, slowly, building the new marine transfer station to bring New York sludge from garbage trucks to ships, then out 12 miles to sea, where it’s dumped in international waters.

The three men were leaning on the cast iron railing, smoking cigarettes and drinking ponys of Bud. They were speaking in rapid fire Spanish and occasionally spitting into the upflowing murk of the East River, watching the residue of their effluvium ride the tide toward Harlem.

“Buenos noches,” the oldest one returned.

It was then I noticed a thick strand of rope tied over the railing, which indicated to me that they had a net in the water and were going for late-season blue-claw crabs.

“You have caught anything?” I asked them.

“We have caught nothing,” the short one answered. “We are not here to catch. We are here to talk.”

I wondered why they had chosen a rainy strip of concrete to talk, not the incandescent warmth of a bar.

Just then, one of the men pulled up their crab net. Inside was a large crab with, if I can mix my metaphors, doe eyes. They released El Triste from the netting, gave him the requisite chicken neck to gnaw on and let him scamper on the sidewalk.

“Every night at this hour. We come to talk to El Triste.”

Whiskey sniffed at the crustacean who seemed not to notice.

“The Sad One speaks,” said one of the men.

El Triste left his chicken neck and scampered over to one of the beaten wooden benches the homeless sleep on in the sun. He climbed and sat on it, like a throne. This fairly spooked Whiskey and she began pulling me to leave.

“Escuchar. El Triste habla.” Listen. The Sad One speaks. The three men dropped their cigarettes into the viscous water below.

“Thoreau was right,” El Triste said. “And he wasn’t even a crab, but a man. And a fresh-water man, at that. Most men lead lives of quiet desperation.”

El Triste cleared his throat and one of the men spoke up.

The three Puerto Ricans looked at the water then lit their cigarettes again and drank their Buds. They spit, each in sequence into the murk. Their way of saying gracias to El Triste.

Whiskey pulled again at her leash. I bid the men goodnight.

And walked home with the song still in me.