A long week's journey into Friday. 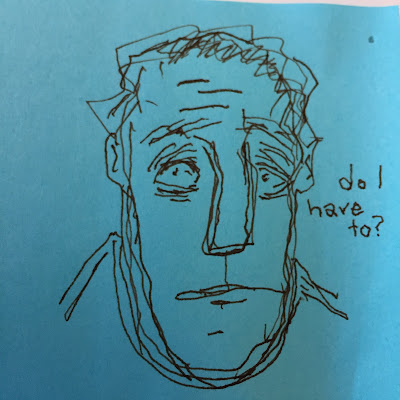 There have been times when I felt like I was at the wrong end of a shooting gallery. The demands, the changes, the 'things that must be done,' the meetings, the beatings, the defeatings have come fast and furious.

And most important, it's Friday.

There are times, I'll admit, I look forward to Fridays the same way a wanderer in a great desert looks forward to a faraway oasis.

I'm fortunate, yes, I know that.

Fortunate that I truly like the people I work with and for. Beyond that, I am proud of the work we produce. It's good, it's smart, and there's plenty of it. What's more, we make things small and large and in-between for just about every conceivable channel.

But what I can't seem to find amid the craziness of a modern ad agency that has to squeeze its workers beyond humanity in order to pay a few nabobs at the top eight-or-nine-digit paychecks, is that it seems sometimes there isn't in an entire day or an entire week or, even, an entire month, a moment to pause and reflect on what you've done, what you've written, what you're thinking.

What I most miss from 25 years ago is the time we used to have to walk around the block before you had to turn in a piece of copy or a script.

I have this time, though.

These early mornings when I find something to write, something to write for myself. A time where I can weigh my thoughts, sip my coffee, and--I'll say it--take a breath--before rushing to another fire or fending off another onslaught.
--
About 90 years ago when the industrial world switched from a, roughly, 60-hour-week that included mandatory Saturdays (the two-day weekend is a relatively new concept) to a 40-hour 9-5 week, industrialists and the malefactors of great wealth who rules us as if we're serfs, were sure there would be deleterious effects on productivity. Instead, productivity per person and per hour rose.

There's something, I think, to be said for treating humans like....humans.
Posted by george tannenbaum at 9:04 AM