Valentine’s Day is always the saddest day of the year for me.

Not because of unrequited love, or the little red-haired girl not even knowing that I exist.

It’s because Valentine’s Day is my sister’s birthday.

And my sister is dead. 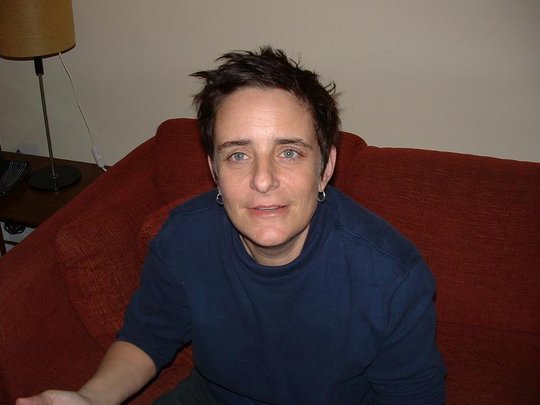 Nancy died almost ten years ago at the age of 47. She had just bought a brand-new Ducati motorcycle and early one Sunday morning, she was taking it upstate to find a winding road on which to air the machine out.

She was driving north on 12th Avenue and at 52nd Street, a drunk ran across the road. She swerved to avoid him and lost control of the bike. She tumbled over the handlebars and the bike tumbled over onto her, crushing Nancy, almost immediately, to death.

The cops called me and told me to wait at home. Ten-minutes later two officers, a woman and a man, showed up to my apartment. When I opened the door and saw them there, I immediately said, “She’s dead.”

The cops avoided my eyes, looked at their well-shined shoes, and said yes. We sat in my living room and they explained to me what they knew.

The next day, I had to head down to the morgue to identify her body. It's an ugly building, the New York City morgue, a 1950s monstrosity with a blue-brick facade that was, for a brief time almost 70 years ago, stylish. Even now, ten years later, when I drive past the building in a taxi, I can't look at it. It must be how Germans feel when they see old photos of bombed out Cologne or Dresden.

An over-eager young doctor was there, pushing me to permit him to do an autopsy, but I denied him that pleasure. I know that corporeality doesn’t count for much, but I couldn’t let anyone cut up my sister.

Nancy got the short end of the stick in many aspects of her life. To say that she was raised by wolves is unfair to wolves. My parents, with three kids under four had too much on their plates to deal with Nancy. I was only 27 months older than she, so I spent a lot of time caring for her, or trying to. I am one of those people who was born old.

Of course, being a kid myself, there was only so much I could do. I couldn’t fully compensate for the crappiness of how my parents treated her, or worse, ignored her. But along the way, I helped her find jobs, I loaned her money and I tried, I tried very hard, to be a soft-shoulder to cry on and a willing ear to listen.

Nancy had called me that Saturday, the day before she died. She wanted to come over for dinner. But I said ‘no.’ I was tired and really just wasn’t in the mood.

Of all the things I regret in my life and my self, I regret that moment of emotional stinginess the most. Maybe if I had had her over she wouldn’t have gone out riding the next day and she’d be coming over today for her birthday.

People do crappy things in their lives. Most unwittingly. Because they’re tired, or they just don’t feel like it, or ‘Casablanca’ is TV and they’d rather not.

Nancy visits me--I feel her spirit and even her touch--at least half a dozen times a year. She'll come over during a holiday meal and sit down next to me and take the lion's share of of the dark meat or whatever we've made for the occasion. Or she'll walk alongside me when I'm playing with my dog, Whiskey, at the beach. Then, as suddenly as she appears, she'll be gone, and no one's the wiser, except me and my bloodshot eyes.

That’s the short version of why today isn't a day for me like it is for so many others.

Because I remember Nancy.

Because I love Nancy.

Because I miss Nancy.