A night in Chinatown.

We went down to Chinatown Saturday night, to Joe’s Shanghai for their famous soup dumplings. Unfortunately, it seemed like half of New York had the same idea, and the line to get into Joe’s was about an hour long.

The friends we were with knew a place around the corner on Doyers Street called Apotheke, a speakeasy of the modern sort.

As a denizen of the Tempus Fugit, a bar without pretense or, even, decoration, I was dubious about Apotheke. For one, it was way too populated. There were heavily-dressed and elaborately accoutred young people everywhere. There was non-melodic music pounding on the too-loud sound system. And the bartenders themselves were too theatrical by half, a far cry from the laconic proprietor of the Tempus Fugit. 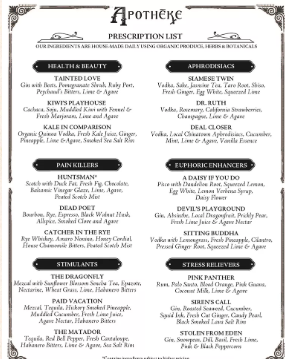 We finally found four seats together within spitting distance of the bar, lit the flashlights on our iPhones and scanned the Los Alamos-level-complexity menu scanning for a suitable drink.

I was hoping--as a speakeasy should--that they would offer my favorite libation, a Suffering Bastard. I asked a bartender--currently called a mixologist. She had on more makeup than a Carol Channing-impersonator hoping to hide a black eye. Behind those acres of mascara, rouge, lip-gloss, foundation and more, she slowly closed her baby blues girded with false eyelashes the length of a derelict suburban lawn. She kept her eyes closed for a few seconds, opened them and stared me down with a look that could freeze an Inuit.

"An ounce of bourbon, an ounce of gin. Some lime-juice, bitters and four ounces of ginger beer."

In just minutes she handed me something dark grey, almost charcoal colored in a snifter glass.

"They suffered, too," I answered.

With that she turned on her stilettos and went to serve another customer.

Just then, my friends informed me that an hour had elapsed and it was likely our table at Joe's would be just about ready.  I scarfed down my dead poet, and feeling a bit like Coleridge while composing Kublai Khan, I walked, woozy down Doyers and onto Pell and into Joe's Shanghai.

In short order, the four of us were seated at a communal table for eight. In just minutes a steaming hot bamboo container of soup dumplings was placed in front of me.

"This is perfection," I said.

"Just what a suffering bastard needs," my friends said.

And I suffered, silently, through the rest of the meal.

Posted by george tannenbaum at 5:16 AM