All things to all people. 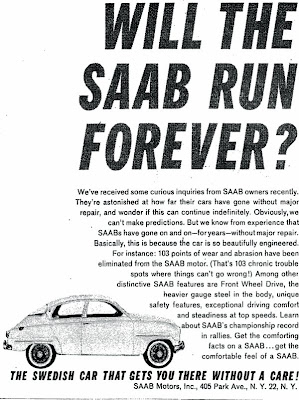 The impending death of Saab may be attributed to the worldwide recession and the severe drop in auto sales, but in this case, I blame not those factors alone, but imperial over-reach.

The Saab brand was built in this country as an iconoclast's car. It was odd-looking and had odd characteristics. Like the ignition was on the center console instead the steering stalk or to the right of the steering wheel.

And Saab, by all accounts prospered. At their peak back in 1986 they sold about 50,000 cars. That wasn't bad and was comparable to what BMW or Mercedes were selling in the US at the time. Saab had reached its constituency and pleased them.

Then they got greedy.

We can sell more cars if we downplay Saab's soul and play-up its mass-ness. So Saab changed its marketing. Changed its product. And went looking for more customers while forgetting what had created so many Saab zealots in the past.

In short, they homogenized and tried to massify. In so doing they lost their essence, their Saabness, their reason for being. Now they are on the brink of bankruptcy.

I wonder how many agencies have followed this pattern. They grew strong by helping small, quirky underdog brands with smart, feisty advertising. Then they sold to a holding company and had to go after the biggest brands. Before long agencies that followed this pattern lost their uniqueness and reason for being. (The agency that made Saab, by the way was an Alma Mater, Ally & Gargano, who merged with a bland agency in an attempt to satisfy its shareholders and win larger pieces of business.)

When you decide to massify, no matter what business you're in, you leave the business you were originally in. If you are a massifying small automaker and intend to grow large, you begin to compete not as an automaker, you compete on efficiency. How can you please the greatest number of people at the lowest possible cost. This is how advertising holding companies work today. Board meetings, I promise you, are about "scalability" "efficiency" and "reach."

I guess this is what they call selling out.
Posted by george tannenbaum at 5:57 PM

Boy are you dead on or what. SAAB is especially dear to me as I was in fact born in the town where they make it, Trollhättan. (Yes, trolls come from there too, and Trollhättan translates to Trollhat.) I never lived there though. Grew up in the town where they make Volvo. Both brands are being fucked by big, stupid, greedy, bland auto companies who knows nothing about what makes a brand tick. All cars are basically the same, in the name of efficiency. Different names but all the ads are the same.