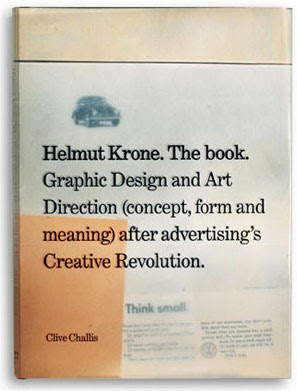 As the world seems to collapse around us, as the Times writes about long lines at soup kitchens, as the stock market tumbles, it's not hard to become even more jaded than 30 years in the advertising industry would ordinarily render you.

So about a month ago I went to amazon.co/uk and ordered a book by Clive Challis called "Helmut Krone. The Book." (It's not currently available in the US.)

Because it's focused on one man's work, you get to see more than just Krone's opus. You get to see the workings of a mind that says every day and in every way, "I will not compromise."

These are the feelings that we all have to fight through at one time or another. Order this book and you'll have a giant fighting alongside you.
Posted by george tannenbaum at 1:16 PM