A bit of vaudeville this morning. 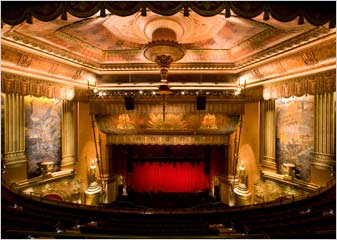 The unveiling of the $16 million renovation of the 80-year-old vaudeville theater the Beacon impels me to write of a hero of mine who died Tuesday night--also an old vaudevillian. Moshe "Soupy" Weinstock teamed with Schmuel "Slappy" Tenenbaum (my uncle) to form the comedy team "Bacon and Eggs." Soupy played "Bacon" and Slappy played "Eggs." They'd open their act like this...

"We're Bacon and Eggs,
We're pals and we're chums,
When one of us is singing,
The other one hums!

Here are a few "bits" I remember.

BACON: My friend has been elected mayor.
EGGS: Honestly?
BACON: What does that matter?

BACON: My father killed a hundred men in the war.
EGGS: What was he? A Gunner?
BACON: Nope, a cook.

BACON: I want to ask for the hand of your daughter in marriage.
EGGS: You’re an idiot!
BACON: I know it. But I didn’t suppose you’d object to another one in the family.

Nothing about advertising this morning. Just some recollections of a time when comedy was king.
Posted by george tannenbaum at 7:12 AM