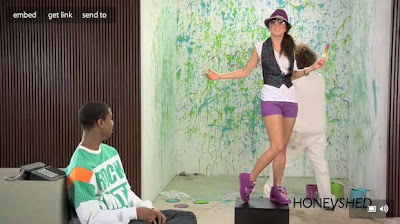 As a matter of fact, Honeyshed, we didn't know thee.

OK, a bit of background for those readers over 25 in chronological age or under 25 in IQ. Honeyshed, a product of either David Droga's genius or hubris was hailed, when it soft-launched back in November, 2007, in a well inserted press release in business week as "a combination of MTV and QVC." On their site they claim to be "reinventing shopping for the digital generation."

In point of fact there was no there there. Cleavage hawking products. Or gangstas hawking products. Coupled with oh-so-clever language like "fun shit," in a strained effort to show young people how terribly hip Honeyshed was/is. Reportedly Publicis sunk $25 million of its shareholders' dough into the star-crossed jerk-off but despite the charisma of Droga and the money of Levy, they built it and customers, as Yogi might have said, stayed away in droves.

I never saw the point to Honeyshed. The products looked like they came from a shit shed and watching illiterates talk about crap never appealed to me.

BTW, the Ad Contrarian http://adcontrarian.blogspot.com/2009/02/one-last-super-bowl-thought.html pointed this out in reference to the Stupor Bowl: "Seventy-seven percent of the wealth in America is controlled by people over 50. Exactly which Super Bowl spots did America's marketing geniuses direct at these people?" The same can be asked about Honeyshed. Meaning, why spend so much dough selling to people without it?

My issue is simpler. Once again in a blatant act of pandering to new technology, people felt the need to reinvent a basic human act:shopping. Shopping is shopping. It needn't be reinvented. It hasn't changed since we traded lice-picking for bananas.

Maybe the issue with Honeyshed lies with its name.
It should have been called Moneyshed.
Posted by george tannenbaum at 7:15 AM

brilliant articulation on what many intuitively feel about this little experiment...thanks for shedding some light ;)