If you want to see a modern movie. 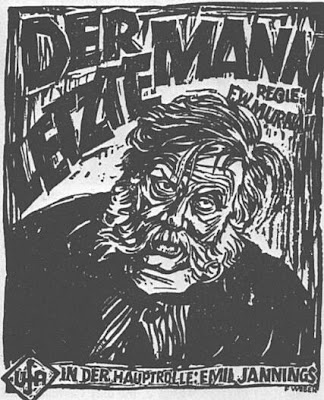 Just recently Kino (www.kino.com) the great film restorers and distributors, re-released F.W. Murnau's brilliant movie from 1925, "The Last Laugh." While my loved ones were watching televised swill, I went to my sanctuary and watched it. You can find clips of the flick on You Tube, I suggest searching under Last Laugh + Murnau so you don't get sent to some Batman and Joker footage.

There's a reason I like movies that were made when movies were new. The stories they chose to make were often simple but epic. Like fairy tales. But to make them contemporary they experimented with techniques--music, focus, bi-packing, etc. which advanced the story. Maybe more important, they had no reference points. No, "we'll shoot this like Hitchcock shot 'Rope'" or some such. Therefore, such movies are more, I think, original.

Often I excoriate myself by having a better sense of films from the 1920s than the 2000s. I tell myself I should be more contemporary and knowledgeable about what's happening now. But, sorry, somehow I think what was made then was fresher and more original.
Posted by george tannenbaum at 7:31 PM