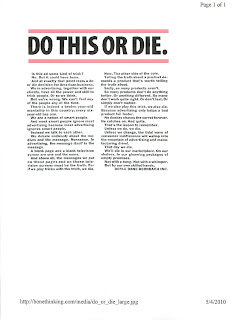 Yesterday the great Dave Trott commented on a post of mine, "Random Memories." He referenced a special sort of advertising that thrived here in New York in the 1960s and early 70s. This was advertising that had a tough, roll up your sleeves and no-nonsense tone. And a brusque and unassailable logic that woke you up and changed your perceptions.

"It takes a tough man to make a tender chicken." For Perdue.
"Drive it like you hate it." For Volvo.
"Choosing an airline for its food is like choosing a restaurant for its flying ability." For Pan Am.

And then there was this house ad for DDB. Written by Bob Levinson and art directed by an ex-boss of mine, Len Sirowitz. Below, I've pasted the copy.

As we say in New York, read it. Or get the fuck out of here.

Is this ad some kind of a trick?
No. But it could have been.
And at exactly that point rests a do or die decision for American business.
We in advertising, together with our clients, have all the power and skill to trick people. Or so we think.
But we're wrong. We can't fool any of the people any of the time.
There is indeed a twelve-year-old mentality in this country; every six-year-old has one.
We are a nation of smart people.
And most smart people ignore most advertising because most advertising ignores smart people.
Instead we talk to each other.
We debate endlessly about the medium and the message. Nonsense. In advertising, the message itself is the message.
A blank page and a blank television screen are one and the same.
And above all, the messages we put on those pages on those television screens must be the truth. For if we play tricks with the truth, we die.
Now. The other side of the coin.
Telling the truth about a product demands a product that's worth telling the truth about.
Sadly, so many products aren't.
So many products don't do anything better. Or anything different. So many don't work quite right. Or don't last. Or simply don't matter.
If we play this trick, we also die. Because advertising only helps a bad product fail faster.
No donkey chases the carrot forever. He catches on. And quits.
That's the lesson to remember.
Unless we do, we die.
Unless we change, the tidal wave of consumer indifference will wallop into the mountain of advertising and manufacturing drivel.
That day we die.
We'll die in our marketplace. On our shelves. In our gleaming packages of empty promises.
Not with a bang. Not with a whimper.
But by our own skilled hands.

Posted by george tannenbaum at 6:33 AM

Jesus George, you sound like someone who just shook hands with a celebrity and won't wash his hand for a week. Yes Dave Trott is great. And New York advertising used to be great. Now calm down and remember, he'd probably hate all your ads if you showed them to him.

Well, I was about to write something nice when my eye caught the comment by Anonymous. Instead I will reply to Anonymous. Dear Anonymous, why don't you dare to use your real name? Are you afraid of George? Or are you afraid others will find your comment silly? George is writing his blog under his real name and even includes a photo. The possibility to comment on most everything online is a privilege. Hiding behind an anonymous blanket should be saved for times or situations when it's the only way to speak ones mind, or the truth, without repercussions. Wimp.

How the world has changed. Not necessarily for the better but has changed nonetheless. Different era. Different executions. Creativity is inextricably tied to the context of its time.

Anonymous One had a fair point, though harsh. The post did seem a little teengae girl-ish. I guess some of us don't swoon over advertising executives, even if they did work at DDb in the 1960s.

gee whiz, all I did was say "the great Dave Trott." I'd hardly call that a teenage swoon.

George, nice post. I, too, remember the days when advertising used to be powerful, not...entertaining.

Todd, the thing is, spots are not even entertaining.

It's strange to fawn over 1960s advertising. It was written for a different culture and a different audience. It would fail today. I remember when phone calls were a dime, too. But I don't obsess about it and say that the world was better when phone calls were a dime. You've got to write advertising for today's audience. That ad you showed belongs in a museum as a cultural artifact.

Hey Tore, I appreciate George's blog because it gives me a chance to beat him up a little. What I mean is, in real life, I don't get to offer critiques to advertising superiors like George. You disagree with your boss in this industry and you are very quickly fired. The management style of the ad business is strictly top-down. Take it from someone who has spent most of his time on the lower rungs of the agency hierarchy, dissent is not accepted, no matter what you hear to the contrary. The creative directors are king. Say something bad about the king and you will be blackballed from this business. That's why serfs like me and I assume the other fellow up above remain anonymous.

Sometimes we stay anonymous because we're lazy and it's fast to just click the anonymous button. But you're right, say a bad word about George and you will be banned from the industry for life, or longer.

I have the power to determine who all these anonymi are. I have the technology. And now I will destroy you like the vengeful god I am.

Well, the industry, and its mostly insecure CD's are in a bad state if one has to speak the truth under the disguise of Anonymous. But I know what you mean. I have often during my career spoken my mind, and it has not always been rewarding. However, if we all stood up for our thoughts and what's on our minds, the world would be freer.
And we probably would had to suffer fewer fools. Somebody has to do the job at the end of the day. And trust me, if they are down to hire monkeys they will soon get their ears full. Monkeys are too stupid to shut up. Let's start a speak up movement. I'm actually certain that not all clients are morons. More clients than not want to hear the truth. More CEO's than not what to hear the truth. They are not used to hear it from anybody but their linear peers however. Actually, I think the best CD's want to hear the truth for a change. We can only change it by stopping bowing down to all and everything. Don't chain yourself. And as a side comment to some comments about the times have changed. No they haven't really. It just got sillier. It actually reverted to what it was like before the creative revolution. It's time to revolt again. On all fronts! It will be modern by default.

BTW guys, I'm knocked out anyone in New York has even heard of me.
I didn't think anyone outside London or Sydney knew who I was.
About the anonymous debate.
For me it's like not putting your name on an ad you wrote, why would you do that?
I'd only take my name off it if I was ashamed of the ad.
That's how I feel about comments.
If I like it I want to put my name on it.
If I don't like it enough to put my name on, why would I even do it?