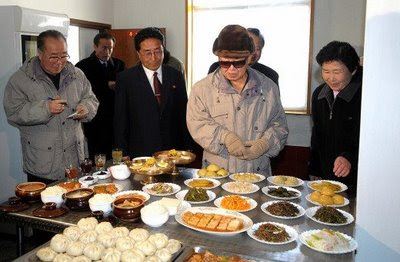 This happened 25 or 26 years ago, yet I remember it like it happened yesterday. I was sitting with my partner, Craig, in my office. We were just coming off the high of winning a raft of awards for a small fast-food chain called El Pollo Cubano in which we named their new fish sandwich "the Fidel o' Fish." The sandwich was a huge hit and Craig and I were riding high. I wrote about it some years ago and you can read it here: http://adaged.blogspot.com/search?q=Fidel

Now we were charged with bringing El Pollo Cubano's new Korean BBQ fish sandwich out of the test kitchen and right into the very fabric of American culture. This was to be more than the introduction of just another sandwich. We knew we needed to start a movement. We needed to synch with and have an impact on popular culture.

Craig was flipping pencils up at the ceiling when the phone rang. I picked up the Ameche and heard a crackling on the other end of the line. "Hold please for the great and exalted leader of all Koreas."

I snickered and just about put down the blower when I heard a heavily-accented voice on the line.

"This is Kim-Jong-Il. It would do me a great honor to have, like my comrade Fidel, a sandwich named after me."

Apparently having an eponymous sandwich was now a mark of honor among the world's dictators. I could see Tito Taters. Noriega Nachos. And of course, fish and Gorbachips.

I put the phone on speaker. Craig took over.

"We shall do our best, Exalted One" my partner intoned.

I think I was the one who said it, though Craig swears it was him.

We ran that up the client's flagpole and in a few short weeks, we had a hit on our hands.

We tried phoning the Exalted One, but could never get through to the North.

I remember like it was the day before yesterday. My favorite ad we did was the one with the headline:
"Is that a Kim Jong in your pocket or are you just glad to see our Il-lest Korean Barbecued Chicken on the menu?"

Oh those were the days.

A very nice informational blog.Keep on making such important blog post.Your work is really being appreciated by some one.

I love these stories, George.

George I was in need of of some major smiles today... And this my friend was exactly what the doctor ordered.

Hope you had a wonderful holiday season.