Germantown then and now.

Back in the 1970s, the neighborhood I live in now wasn't called Yorkville like it is today. It was called Germantown due to the large, though dwindling, number of Germans who settled in the neighborhood. 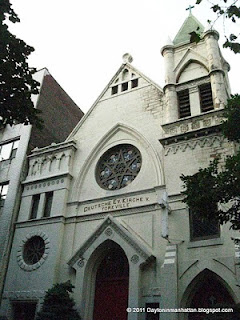 They came, these Germans did, in the late 1800s and did what immigrant groups always do. They lived near each other, opened up small groceries and restaurants and established social organizations and places of worship.

By the late 70s when I moved to the area, most of these places were in the throes of closing. And more people were referring to the area as Yorkville and less as Germantown. Still, some remnants remained. 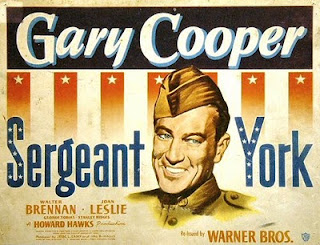 (I might add that York Avenue--the Avenue my apartment house is on, was not named after the Duke of York or any such Anglo-Saxon nobility. Until World War I, York Avenue was called "Avenue A." It was renamed York Avenue to honor a World War I hero, Alvin York, who captured a passel of Germans. York was later played in the movies by the great Gary Cooper. That could be my definition of a hero. Someone played by Gary Cooper.)

Of the places I remember best, one is gone and one still remains. The place that's gone was called "The Ideal Coffee Shop." It was a small restaurant four or eight steps up from the side walk on 86th Street between 2nd and 3rd Avenues. There's a highrise in the location now. It was once a giant Barnes & Noble and is now the Fairway Market.

Ideal sat maybe 16 people max. There was a small, maybe six-foot-long linoleum counter lined by bar stools covered in a red vinyl. In the back there were three or four small tables for four with unmatched wooden chairs. That was about the size of it.

Ideal never changed its menu. It changed its prices on the same old plastic covered menus they probably presented decades earlier. And the menu was limited. In fact, I can say this, I probably ate at Ideal a dozen times and never ordered anything but the knockwurst with German potato salad and the most amazing red cabbage I ever will eat. Along with that you could get a glass of beer in an old juice glass for 50 cents. 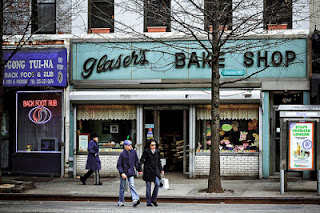 Ideal closed unceremoniously about 30 years ago. But Glaser's, a German bakery still holds court on First Avenue between 87th and 88th. Glaser's has old wooden display cases and a mosaic tile floor and entrance where the name Glaser's is spelled out in darker tile. They still bake everything there and make the best sugar-frosted raspberry jelly donuts in the city. When you buy a cake there, they place it lovingly in a cake box and tie the box up with fierce German efficiency with string that spools from a dispenser that hangs from the ceiling.

Glaser's has resisted the bakery trends of the city. They don't sell macaroons for four dollars each or cupcakes like they do at Magnolia bakery. They sell cakes like they sold in 1912. 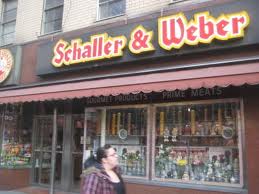 There are a few other traces of Germantown left. There's the German church on 84th Street between 1st and 2nd where I'm sure the Bund held meetings in the basement. And then there's the famous Karl Ehmer butcher shop on 2nd Avenue and 86th Street where you can buy any kind of sausage you can buy in Munich. Karl Ehmer's front window is decorated with hundreds of ornate beer steins. It's probably been this way for 70 years, if not longer. Just half a block down from Karl Ehmer's is the Old Heidelburg Restaurant. It's also been there for decades, though now the lederhosen-clad wait staff are Mexican, not German.

Over the last couple of years more and more of the old tenements have come down and highrises have gone up. The Second Avenue subway, after more than half a century of delays is finally being built. More change will come to the neighborhood.

As my old man used to say, "New York would be a great place to live, if they ever finish it."


Posted by george tannenbaum at 8:36 AM

The Heidelberg. In my New York days, some twenty years ago, I spent many nights there for the good beer and the nice people. And the pickled herring and the pork shank. The amazing, spectacular, enormous pork shank. And at Christmas time, far from family, a goose that warmed my belly and my heart.