There's a meme running around now called "What a $4 million Super Bowl Ad Could Buy in Digital." You can see it here: meme

The meme, to my mind, makes a lousy argument.

It seems to me that people are still bickering over channel efficacy as if it's an either/or proposition. Either you do traditional or you do digital. No one wants to say that it's proper, intelligent and effective to have a mix.

This reminds me, of course, of the perennial battles between different branches of our armed forces.  The air force always asserted it could win a war on its own. The army, navy and marines have made similar claims.

The real answer is that it takes a variety of forces to carry the day. 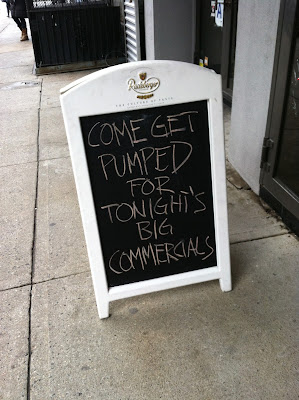 In any event, here's a sign I saw in my neighborhood. Not bad for a medium that doesn't matter.
Posted by george tannenbaum at 1:18 PM

Anonymous said...
This comment has been removed by a blog administrator.
February 3, 2013 at 2:29 PM

Does your site have a contact page? I'm having a tough time locating it but, I'd
like to send you an email. I've got some recommendations for your blog you might be interested in hearing. Either way, great site and I look forward to seeing it improve over time.

Here is my web site; no deposit online casinos

At this moment I am ready to do my breakfast, after having my
breakfast coming yet again to read additional news.

Look at my web page :: www.restoredinc.com

Today, I went to the beachfront with my kids. I found a sea shell and gave it
to my 4 year old daughter and said "You can hear the ocean if you put this to your ear."
She placed the shell to her ear and screamed. There was
a hermit crab inside and it pinched her ear. She never wants to go
back! LoL I know this is completely off topic but I had to tell someone!

Pretty section of content. I just stumbled upon your website and
in accession capital to assert that I acquire actually enjoyed account your blog posts.
Anyway I will be subscribing to your augment and even I achievement you access consistently rapidly.


Here is my page pokies