When I was a kid, it was often my job, or more aptly, my punishment, to clean out the basement and the attic of my mother's home. This was a woman who never met a National Geographic or Life magazine she didn't save. They'd be piled high--these were the dark days before duct tape served as everything from a plumbing necessity to an S&M must-have--and bound with cheap twine, the kind you bought at the hardware store, 29-cents for 100 feet.

I'd be sentenced to my mother's Coventry and was told not to come out "before you could eat on the floor" and I intended to do a good job and fast, but I'd quickly get lost in a map of Pompeii or a four-color photoessay on deforestration in Vietnam. Before I knew it it would be late--seven or eight o'clock, and all I'd done was further mess the mess by unwrapping that which had been bound.

I'm not sure that all this was bad for me, though it was cold (metaphorically) and isolating and probably left me colder and more isolated than I'd otherwise have been. That said, I found the meander. I found a circuitous way to pursue things I found interesting. I found--as heretical as it may seem if you're an 'educator,' a way of learning that suited my chemistry.

Just a day or so ago I read in the cheery Neo-Fascist Murdoch-owned "Wall Street Journal," an item about a company that laid off nearly 5,000 workers. Apparently in just one month, these workers had watched five-million YouTube videos during work hours. "Thirty-five percent of the bandwidth at headquarters was routinely used for such loafing off."

I'm not sure what the point is today.

If you're reading this you're probably doing so at work, so technically you're loafing. I'm sure you have some job numbers you bill against. And likely that's a better use of your time than watching "gallon smash" videos or some Harlemites shaking.

But, I suppose there's another way of looking at loafing.

It's a form of release.

A form of discovery.

An attempt to form a community.

I'll be the first to say that I think a good portion of people are simply not busy enough. And the case at the company above seems pretty egregious. (It's three videos an hour every hour of the day every day of the month.)

But meandering is essential to life. 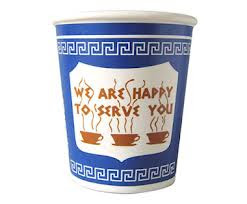 The tile shown above is of a form called "the meander." Named after the Meander or Menderes River in Turkey. The country, not the poultry.

It's one of the oldest forms known to man. You see it everywhere, from antiquity to today.

I think there's a reason why.

Posted by george tannenbaum at 9:37 AM

What type of facist is the WSJ?