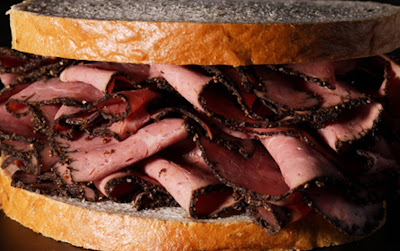 As you'd know if you knew him, Uncle Slappy was waiting impatiently for me to return home from work. He and Aunt Sylvie are city people and they have no problem, while they're here, taking a stroll, going to a museum, or seeing a movie. I'm thankful that at 85 and 84 my Aunt and Uncle still have all their faculties in tact.

Nevertheless, Uncle Slappy could barely wait for me to come home from work. Not only did he want to watch Jeopardy! with me, he was fully and eagerly anticipating watching the Knicks, who were slated to play the Pistons of Detroit at the Garden at 7:30.

With my wife out of town, and not particularly feeling like cooking, I asked Uncle Slappy and Aunt Sylvie if they wouldn't mind a light dinner of the sandwiches that were left over from yesterday evening's Super Bowl party.

They both agreed that sandwiches would be fine and I began putting a nice platter together for each of them.

Aunt Sylvie, who at 84, is still slim and still watching her figure asked for nothing but turkey. Uncle Slappy was less diet-conscious and requested "pastrami. Straight up."

We turned on the Knicks and commenced eating our sandwiches in front of the flat screen.

"We saw the George Bellows exhibit at the Met today," Aunt Sylvie said.

Slappy quickly cut her off.

I did nothing more than nod in his direction. And he continued.

"And what is pet pa," I inquired. I am used to playing the straight man to Uncle Slappy.

"It's an important organization, doing noble work. It's People for the Ethical Treatment of Pastrami. Now this pastrami," he eyed his Carnegie Deli-sized phonebook of a sandwich, "this pastrami has been treated ethically."

"Too many people take Pastrami for granted. They serve it cold, not warm. They eat it on white, not rye. It's wrong, I tell you. Wrong."

Fortunately at this point the Knicks came on and Slappy lost himself in the game.


Posted by george tannenbaum at 8:07 PM