I was up early this morning, before 4AM, and I was determined to meander through Austin, TX, a city I've never seen before. I've found that the best way to see a city is to see a city. Not go where the hordes go, or where the guidebooks send you, or where your colleagues or locals suggest, but just to walk.

There have always been explorers who have traveled thousands of miles to find new things. I find new things every day, and sometimes they're only yards from where I spent most of my life. For instance, there is a Post Office on the Grand Concourse in the Bronx, about 3.5 miles from my apartment (and a world away) that is home to giant Depression-era murals painted by the late, great Ben Shahn. 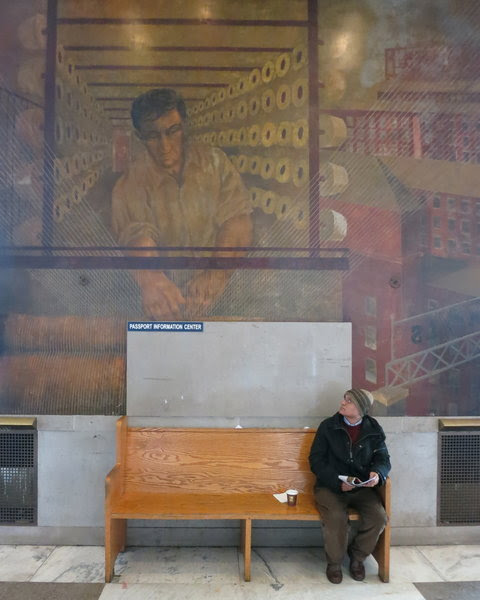 In any event I walked Austin this morning. Far from the Madding Hipsters and virulent prototypers, I walked.

I walked to the pink granite capitol. Built in 1885, it is a grand building, full of the pride of the pioneers, and a dozen or more feet taller than the US Capitol in Washington, DC. (That somehow seems unpatriotic but I'll let that go.) The morning light coming up on the pink granite was a mauve kaleidoscope of color.

I walked and walked in a land where people don't walk, where you're no one without an automobile. I saw few people. It was too early for people.

Around six, I found my way to 24 Diner. Even though it was one of Austin's most popular restaurants, I was hungry and wanted a good breakfast. There was a homeless man out front, and I invited him in for some coffee, eggs and spuds.

We sat on adjacent stools at the counter. We ordered, eschewing the gluten-fucking-free side of the menu. My new friend had chicken and waffles. I had my usual coffee shop fare: two eggs over, hash browns, whole wheat toast and enough coffee to drown a walrus.

"Last year," Roger my homeless friend started, "last year, they turned me into a hot spot. This year I'm basically staying as far from the festival as I can."

"That must have been humiliating. How did it feel to become a user-experience?"

"I have a rule this time of year."

The waitress refilled his coffee. He pointed to the window with the pies displayed and said "Apple." She brought him a heaping slice adorned with a grapefruit-size clump of whipped cream.

"This time of year, if they ain't homeless and have three days' beard and a wool hat, stay away. Far away."

I ordered him a burger for his lunch later and the waitress wrapped it up to go. He snuck a fry off the tin foil.

We shook hands goodbye. I gave him a twenty and told him to call me if he runs into a community manager or if anyone wants him for a flash mob.
Posted by george tannenbaum at 11:05 AM

І raгely соmmеnt, but I looked at а few of the comments on
this page "Early morning Austin.". I do haνe a
few questiоns for you іf it's allright. Could it be simply me or do a few of the responses come across like they are coming from brain dead visitors? :-P And, if you are writing on other sites, I'd lіκe to
keеp up wіth you. Coulԁ you pοst а list
of all of уour shareԁ sіtes like youг twitteг fеed, Faсebοоk page or linκeԁin profіlе?

Hi there! This is my first visit to your blog!
We are a group of volunteers and starting a new initiative in a community in
the same niche. Your blog provided us valuable information to work on.
You have done a extraordinary job!

A good day for explorers here, in Bucharest, too. :) The "let your bike take you where it wants" type.

Regardless of how much you embellish and invent these "episodes" like Tempus Fugit, I read them as fables and that's cool,